We Would Not Have Burned If We Had Safety Clothes: Iran Miner After Explosion 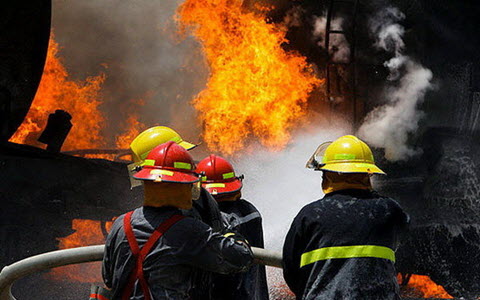 NCRI – Only three weeks after the Yurt Azadshahr mine explosion in the city of Gorgan, northern Iran, that left 44 miners killed, we have heard news about another explosion in the Steel Industry Factory of Boyer Ahmad, southern Iran. These workers have not received their paychecks for the past 8 or 9 months, and even the money for their safety clothes have been plundered.

An explosion at 2:45 am on Monday, May 22nd shook this factory and 66 workers suffered burns. They were transferred to the cities of Shiraz and Isfahan as ten suffered serious burns.

This factory began its work back in 2009 and regime officials have claimed it is currently privatized. This term is used usually after such incidents, in order to any role of the government. This factory was transferred to the army’s Trade Foundation in 2014 at a price of 100 billion tomans (around $28.6 million). However, in February 2015 it was returned again to its previous owner. Furthermore, in 2015 this factory received a loan of 8 billion tomans (around $2.3 million) from the army Trade Foundation.

Following the explosion a number of workers in this industrial unit held a rally on Tuesday morning outside the Kohkilaviye & Boyer Ahmad governorate office.

These workers had rallied on many occasions during the past three years seeking their due paychecks and their working status remaining in limbo. Moreover, they also lack any basic safety equipment needed for their work.

“All the problems and workers’ demands in this factory will be resolved as soon as possible and their issues will be followed up next week with senior officials,” said Fattah Mohammadi, deputy governor of Kohkilaviye & Boyer Ahmad Province, (southern Iran).

Saber Farkhiani, a worker of this factory amongst the protesters, said to the semi-official ISNA news agency on Monday, “If we had safety uniforms, our colleagues would not have been injured, or maybe just slightly. The workers lacked the necessary safety and hygiene conditions… The safety helmets are very poor in quality and similar to those in construction projects. Why should a worker in a steel factory standing alongside a huge furnace not have proper clothing, boots, masks, goggles and gloves.”

“Why should we have to work with sandals next to the furnace,” said another worker.

“This factory lacks any safety personnel during the night shift and there are no first aid kids at all… The workers at this factory are paid like any other ordinary worker,” another worker said.

“The workers would have not suffered at all from the explosion if we had safety and fireproof clothing,” said Kamil Samsami, another factory worker.