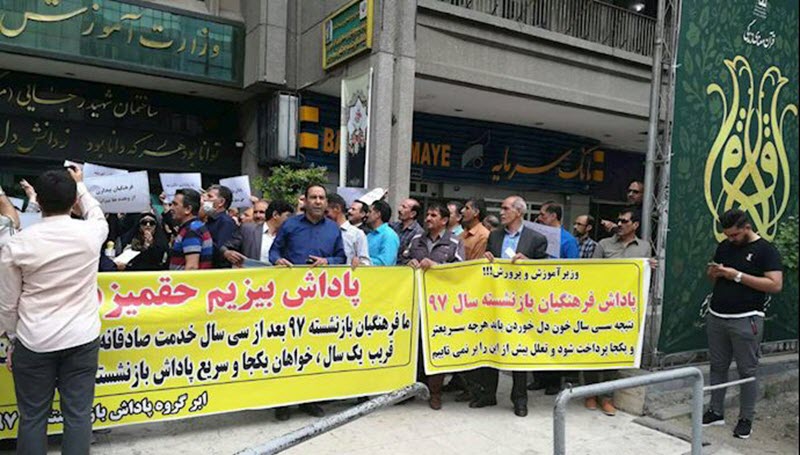 Swindled investors of the Caspian credit firm, affiliated to the Iranian regime’s Revolutionary Guards (IRGC), held a rally on Tuesday, May 21, outside the office of the mullahs’ President Hassan Rouhani demanding their stolen savings be returned.

“Where is our money?”

“Enough with promises; we have nothing to eat!”

“We trusted you with our money; you betrayed us!”

Also on Tuesday, retired teachers and educators rallied in front of the regime’s Ministry of Education in Tehran demanding their delayed pensions.

Protesters gathered at the site of the rally at 10 am demanding answers from officials. They held a large sign reading: “The result of 30 years of hard work should be provided for all at once. We will no longer tolerate any more delays.”

“We are in solidarity, tired of just promises.”

“Pensions of teachers and educators must be provided for.”

“We will not rest until our pensions are paid.”

“Our wages are in rials, our expenses are in dollars,” referring to skyrocketing daily costs in Iran as the regime destroys the economy.

“One less case of embezzlement will resolve our pension demands,” referring to numerous cases of state theft and embezzlement mushrooming under the regime ruling Iran.

The term “deposit losers” (swindled investors) in Iran is a new socioeconomic expression. This term is said to refer to people whose financial deposits have been deposited by governmental financial institutions or other approved organizations for buying a home or a vehicle, etc. but have not been returned to them and even illegally blocked. Hence, these people are called deposit losers. But the concept recently used by these people themselves is “looted”, which is a more precise expression of this phrase. These financial and credit institutions are affiliated with the IRGC and other military and civilian organizations of the Iranian regime.

Currently, the “looted” movement in Iran has become a mass movement in cities such as Tehran, Rasht, Mashhad, and others that are taking place in the form of protests, sit-ins and marches against economic corruption in Iran’s banking system or government institutions and banks.

This movement, which was initially just a guild movement, began to develop itself as a political movement right after the expansion of protests and the lack of accountability of regime officials to the people whose property was plundered, and with slogans against Rouhani’s government, became more radicalized.

A version of this report first appeared on the website of the main democratic Iranian opposition group People’s Mojahedin Organization of Iran (PMOI or Mujahedin e Khalq, MEK)