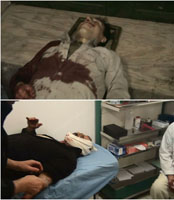 NCRI – Iranian regime's Revolutionary Guards commander Brigadier Abdolreza Shahlai has been named by the National Council of Resistance of Iran as the mastermind behind the deadly attack on Camp Liberty, which left seven dead and 100 injured.

Shahlai is a top IRGC official who has been posted to Iraq for the past 20 years, where he has planned multiple assassinations of the coalition forces in Iraq - in particular US military personnel.

He has also been involved in recruiting Iraqis to send to terrorist training camps in Iran and is in charge of building the Iranian regime's terrorist network in Iraq.

He is known to work closely with IRGC Major general Ghasem Suleimani, the commander of the terrorist Quds Force, and with Ahmad Forouzandeh, Abdolreza Shahlai and Taghavi - all top IRGC officials who oversee assassinations in Iraq.

Shahlai's mission was to recruit paramilitary groups to be trained in Iran.  One such training centre is a military compound called the 'Hezbollah Compound' located near the city of Varamin.

The US Treasury department emphasized: " Abdul Reza Shahlai--a deputy commander in the IRGC–Qods Force--threatens the peace and stability of Iraq."