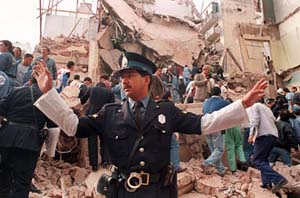 NCRI – An Argentine prosecutor has asked a judge to declare as unconstitutional an agreement between Argentina government and the Iranian regime to jointly investigate the deadly 1994 bombing of a Buenos Aires Jewish community center that local courts blamed on the officials of the Iranian regime, Reuters reported.

Alberto Nisman, who oversaw an investigation of the AMIA center explosion that killed 85 people, presented the appeal to a federal judge on Wednesday, according to a document seen by Reuters.

In a supplemented indictment presented to the court in May, once again the prosecutor reiterated on the arrest warrants for seven leaders of this regime as culprits in this terrorist bombing.

In order to cover up this 18-year-old dossier, the Iranian regime made an agreement with the Argentinean government on 27 January 2013 to form a mutually agreeable delegation to investigate this file.

The current Iranian regime’s president, Hassan Rouhani, was also on the special government committee that plotted the 1994 bombing of a Jewish community center in Buenos Aires, according to an indictment by the Argentine government prosecutor investigating the case.

In the supplemented indictment, as well as the original one that was presented to court in 2006, special prosecutor referred to press conferences, interviews and press statements by the National Council of Resistance of Iran (NCRI) and the People’s Mojahedin Organization of Iran (PMOI/MEK) that disclosed exact details of clerical regime’s role in this crime.

Three weeks after the AMIA bombing, in a press conference in Washington on August 10, 1994 at the presence of dozens of reporters, the Iranian Resistance underscored that the AMIA bombing has been planned and organized by regime’s Supreme National Security Council.

The supplemented indictment raised fears in the clerical regime despite the fact that in recent months the regime worked hard to end this dossier through deals and certain economic concessions.

Argentine prosecutor’s supplemented bill of indictment has exposed in detail this regime’s terrorist network in various Latin American countries that are working under cover of cultural and religious associations and has shown that this terrorist network that has been involved in the AMIA bombing has also carried out many other terrorist operations in the region.