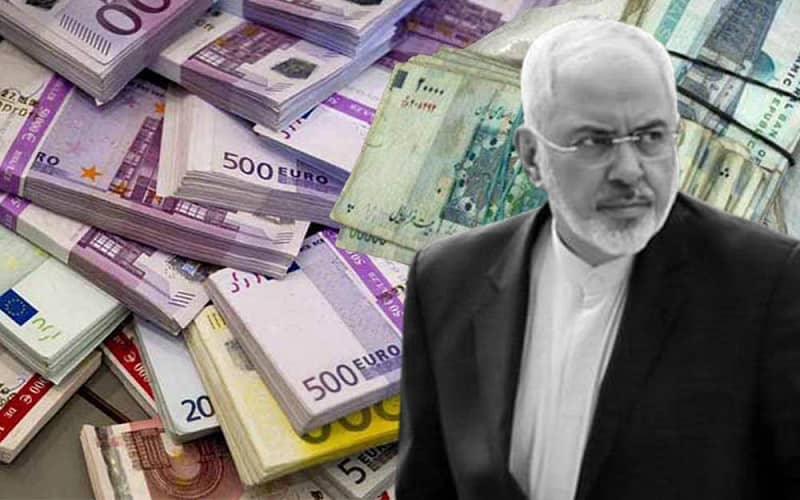 While Iran’s people are suffering from poverty, evidence revealed during the trial of the regime’s diplomat-terrorist, Assadollah Assadi in Belgium, shows how Tehran spent huge amounts of money to eliminate the opposition.

Assadi and his three accomplices, Nasimeh Naami, Amir Saadouni, and Mehrdad Arefani, were arrested in 2018 while attempting to bomb the Iranian Resistance gathering in Paris on June 30, 2018.

Since his arrest, Arefani, by the orders of Assadi and the regime’s Ministry of Intelligence and Security (MOIS), has denied his relations with the regime and other terrorists.

Documents related to police and prosecutorial investigations state that by 2018, the MOIS had transferred more than 226,000 euros in cash to Arefani’s accounts.

Evidence also shows that between 2012 and 2016, Mehrdad Arefani made 179 cash deposits totaling 12,995 euros into his accounts.

In 2017 and 2018, Arefani made 62 cash deposits, with a total of 28,409.50 Euros into his accounts. He deposited small amounts from various branches of the bank so as not to raise suspicion.

All the while, Arefani had claimed he was not working these years and received unemployment welfare from the Belgian government. He also tried to justify how he could receive such a huge amount of money, by bogusly saying he had borrowed 6,600 Euros from a friend, and his father sent him 22,000 Euros in cash, without providing any proof.

The documents also point out that under Article 43c of the Belgium Criminal Code, investigations show a sharp discrepancy between Arefani’s legal income and the amounts in his accounts. Thus, It is reasonable to assume that these amounts come from the sources that are the subject of the present case. 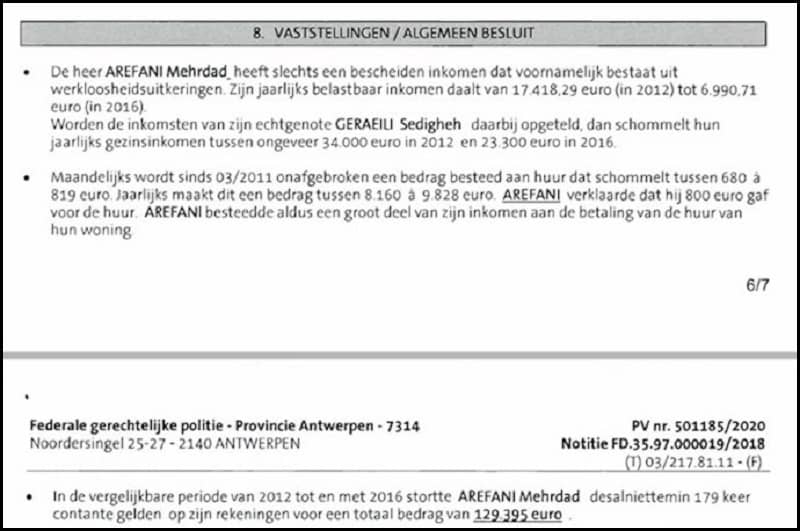 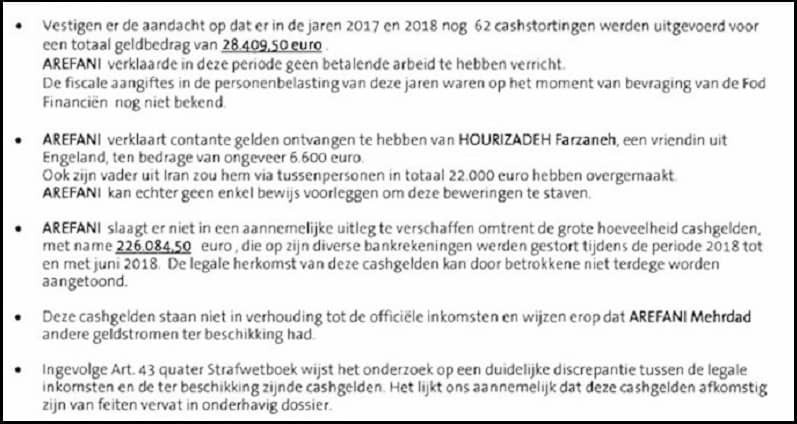 In addition to undeniable evidence found in Arefani’s home, during their trial, when Arefani claimed he was not a MOIS agent, Saadouni said “Arefani is lying, I saw [Assadi] telling him to deny all relations with [him].”

In another interrogation session, Saadouni told the police that he always guessed Arefani was Assadi’s agent. Saadouni told the Belgian police, “Every time I lied to Assadi about the facts of the MEK events, somehow Assadi knew I was lying. Mehrdad was always present. No matter what. Therefore, I’m sure he was in contact with Assadi.”

Saadouni and his wife Naami also received enormous amounts of money from the regime. According to the prosecutors’ indictment, during the last meeting between Assadi and the couple on June 28 in Luxembourg, Naami received the bomb, a new SIM card, and 180,000 euros. On June 26, 19,000 euros was wired to the couple’s account to cover the down payment of a 54,000-euro Mercedes car.

The regime, has been plundering Iranian people’s wealth to fund terrorism across the globe. Recently, on the anniversary of the elimination of Qassem Soleimani, Iran’s terror mastermind, leaders of terrorist groups, such Lebanese Hezbollah, praised Soleimani for his financial support.

On Sunday, December 27, Hassan Nasrallah, chief of Hezbollah, praised Soleimani for his “logistical support” of Hezbollah and not recognizing “any red lines” in sending 9M133 Kornet missiles to Gaza for Hamas and the Islamic Jihad. Nasrallah acknowledged that after the 33-day war in 2006, when 200,000 homes were destroyed in Lebanon, Soleimani paid one years’ worth of rent and expenses of the families who lost their homes. In May 2020, Heshmatullah Felahatpisheh, the former Chairman of the National Security and Foreign Policy Commission of the regime’s parliament, said that the regime had paid Syria up to $30 billion.

Newly published evidence during Assadi’s trial and the facts mentioned earlier suggest any financial package sent to Iran will be used by the regime to fund terrorism.

The European Union leaders should reconsider their approach toward the regime and end prioritizing economic relations with Tehran.

While the EU leaders “are looking forward” to holding business forums with the regime and negotiating with the mullahs’ Foreign Minister Mohammad Javad Zarif, they should remember Assadi was Zarif’s agent. As Assadi’s superior authority, Zarif was aware of the bomb plot and facilitated it by providing diplomatic cover and privileges to Assadi.

It is time for the EU to end its relations with the regime and stop prioritizing economic interests over the security of its own citizens. The EU should sanction Zarif, his ministry and all other officials of the regime involved in terrorism.

Previous article
Iran’s Tactics of Extortion Are Encouraged by a Trend of Words Without Consequences
Next article
Coronavirus Disaster in Iran: The Staggering Number of Deaths in 478 Cities Had Exceeded 198,900