Brave Iranian Student: We Are Condemned in the Court of History for Remaining Silent Vis-A-Vis Genocide in Syria 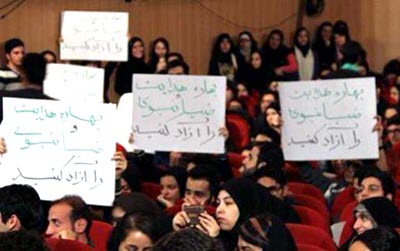 NCRI – During a ceremony on Saturday, December 3, in Tehran’s Amir Kabir University on the occasion of Students’ Day, a brave student for the first time protested against Iranian regime’s meddling in Syria and participation in the massacre of Syrian people.

A video clip distributed in social media shows that this student addressing the participants in the meeting including Ali Motahari, deputy speaker of Iranian regime’s parliament, says: “We are condemned in the history’s court of justice for remaining silent in the face of heinous genocide in Syria.”

Greeted by other students present at the meeting and received the encouragement and applause of the participants several times, he said: “The history is the most just court that can judge us and I am afraid of a day this court condemns us and I believe we will be condemned in the history because we remained silent vis-à-vis the issue of (genocide in) Syria.”

The brave student of Amir Kabir University pointed out that nearly 500 thousand innocent people of Syria have been killed so far and said: “The number is easy to mention but don’t you see that several generations have been burnt (disappeared) in Syria and the country is destroyed. Where do we stand in this game?”

Continuing his speech, the student added: “We are definitely condemned. We are definitely condemned vis-a-vis the tears and cries of Syrian children. There is no voice, no voice and no opposition can be heard against this narrative, against the atrocities committed in Syria. This is our demand and I think if we want not to be condemned in the history, we must show this (speak out) and make our position clear.”

The Iranian regime is the main supporter of Bashar Assad’s regime in Syria. In addition to the direct presence at the fronts and siege of the cities in Syria along with the Syrian army using Russian air cover, the Iranian Revolutionary Guards Corps (IRGC) have armed and brought to Syria thousands of its sectarian militants and mercenaries from Afghanistan, Iraq, Lebanon, and Pakistan to fight against opponents of the Assad regime.