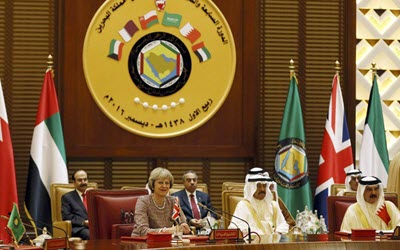 NCRI – The meeting of  Gulf Cooperation Council leaders that started on Tuesday December 6 in Manama, Bahrain, at the presence of Teresa May, British Prime Minster, ended on Wednesday December 7. The summit in its final statement condemned Iranian regime’s meddling in the region.

Eram news in the U.A.E wrote: “The Persian Gulf countries along with the U.K. emphasized their opposition to the destabilizing activities of Iranian regime in the region. They called the regime to end its meddling and recognize the territorial integrity (sovereignty) of the countries in the region.”

The GCC’s final statement states: “The U.K. is still committed to work with the Gulf Cooperation Council member states against any foreign enemy or meddling in their internal affairs in accordance with the international law and United Nations covenants as it has been the case in the War in Persian Gulf and other events.”

The U.K. and Gulf Cooperation Council countries were committed to walk toward their strategic partnership and shared security interests in the Persian Gulf and stand against any foreign intervention.

Previous articleIran: Recruitment of Inmates to Dispatch to Syria
Next articleBrave Iranian Student: We Are Condemned in the Court of History for Remaining Silent Vis-A-Vis Genocide in Syria