Iran: Recruitment of Inmates to Dispatch to Syria 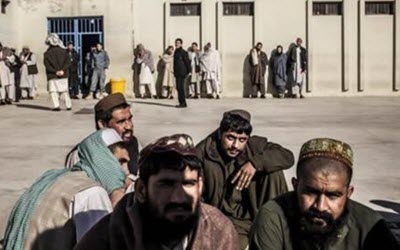 NCRI – After Iranian regime’s failure to dispatch more Basiji (mobilization) and Pasdar (Revolutionary Guard) forces as well as its Afghan and Pakistani mercenaries to Syria to participate in the massacre of Syrian people, the regime has now turned to the inmates in Zabul (Sistan and Baluchistan Province) to force them go to Syria.

According to reports, by the order of Sistan and Baluchistan’s Chief Justice, a native of Isfahan named Najafi has been appointed to encourage the prisoners to take part in the war in Syria.

In this regard, an agent named “Rakht Afkan” has been visiting the inmates’ cells since Tuesday, December 6, and under the pretext of filing (completing their case) for insertion into the prison’s computer system has been asking the inmates’ full profile including marriage, children and so on, and in the end asking them whether they would go to Syria to fight as defender of Shrine!

Reports indicate that the vast majority of prisoners rejected him and gave him negative answer. In addition, a 64 or 65-years-old prisoner named “Adam Khan Barahouie” has strongly protested the agent in this regard.

The regime in Iran is facing shortage of forces to dispatch to Syria to participate in the carnage and further killing of Syrian people. In this regard, the desperate regime is even trying to encourage (or force) the prisoners of over 60 years of age to go to Syria. By promising to give amnesty to the prisoners who are sentenced to death or are serving long-term imprisonment, the regime is desperately trying to persuade them to go to war front in Syria.