Consequences of Easing Sanctions on Iran regime are More Misery, Poverty and Repression for People 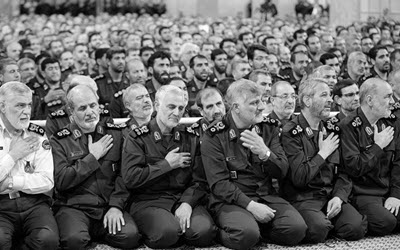 What’s The Price Of Saving The Iran Deal?

On 28 October 2016 forbes.com published an op-ed piece by Mr. Basiri who is an Iranian human rights activist, following is the full text:

After a months-long debate and meticulous preparations, the Obama administration finally proceeded earlier this month with further easing financial sanctions on the Iranian regime under the nuclear deal that came into effect early this year. The latest move, which facilitates for non-U.S. persons to deal with Iranian entities that are minority owned or controlled by sanctioned individuals or bodies.

While, like its predecessors, this latest round of concessions is meant to enable the Iranian regime to restore its ailing economy, the most likely outcome will be more money being funnelled to the coffers of the Islamic Revolutionary Guard Corps (IRGC), an entity that is already sanctioned by the U.S. government for its non-nuclear-related activities.

The IRGC has already achieved notoriety for its role in exporting terrorism at a global scale and is tied—among many others—to the plot to assassinate the Saudi Ambassador to U.S. in 2011 and attacks against U.S. forces in Iraq. It plays a decisive role in continued strife and carnage in Syria, Iraq, Yemen and other countries in the region. And it has a history of making the waters of the Persian Gulf insecure for U.S. vessels.

Of no less concern is the IRGC’s function as the Iranian regime’s main conduit for the violation of human rights at home. Since its inception shortly after the 1979 revolution, which led to the rise of the mullahs in power, the IRGC has been involved in cracking down on opposition and dissent, persecuting ethnic and religious minorities, arresting and incarcerating U.S. citizens, and suppressing women and youth.

It has had a prominent role in torturing, executing and murdering tens of thousands of dissidents and opposition members in the past decades, including the 1988 massacre of more than 30,000 political prisoners, the majority of whom were members of the prominent opposition group People’s Mojahedin Organization of Iran (PMOI).

The Obama administration’s decision to give more financial and economic leeway to the perpetrators of that crime will not be a pleasant message to the families of the Iranian regime’s victims or the members of the U.S. Congress, who are seeking accountability and justice for this unpunished crime.

Although Iran was already profiting from the economic windfall resulting from the Joint Plan of Comprehensive Action (JCPOA), the fear of becoming linked to the IRGC caused foreign investors to stay their hand.

Now, thanks to the latest relaxation of restrictions on the Iranian regime, the IRGC will be even better positioned to fund its nefarious activities in Iran, across the Middle East region and worldwide, which will prove to be damaging for the U.S.’s goals in promoting stability and peace in the region.

So in fact, the same people who were meant to benefit from the Obama administration’s generous flexibility toward the Iranian regime will eventually end up living in more misery, poverty and repression.

This is yet another testament to the reality that the multitude of issues that the world is faced with in respect to Iran cannot be resolved in a siloed and compartmentalized way. The Iran problem needs a holistic approach, a solution that will encompass everything from nuclear proliferation to the export of terrorism and human rights violations.

If Iran is to be reintegrated into the international community as a respected member state, it will have to happen only after the ruling regime shows its respect for its own people and it proves its peaceful intentions by dealing with its abysmal human rights dossier and its export of terrorism.

Previous articleIran Regime Interior Minister: 250 thousand people in Zahedan live with the facilities of 100 years ago
Next articleProtest gathering of thousands of Iranians in Pasargade, site of the tomb of Cyrus the Great