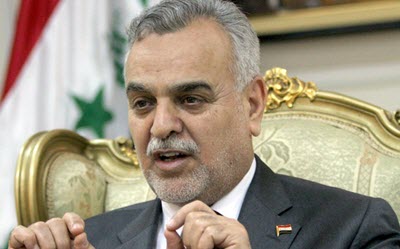 NCRI – In an interview with Al-Arabiya TV on January 27, former Iraqi vice president Dr. Tariq al-Hashemi revealed that immediately after the former Iraqi regime was collapsed following the US invasion in 2003, Nouri al-Maleki was seeking to assassinate and purge the scientists, pilots and high-ranking officers of the Iraqi army.

He said that Maleki took his orders from Ghasem Soleimani, so much so that the lawsuit filed against Tariq al-Hashemi was totally made up and dictated by the Iranian regime.

When I asked Talabani about the fictitious cases Maleki had made up, Talabani said that “following the overthrow of the former Iraqi regime in 2003, Nouri al-Maleki came to visit us in Erbil, saying that ‘al-Dawa party has decided to purge the Iraqi army’s scientists, pilots and high-ranking officers. We want you as Kurds join us in this mobilization.’”

Maleki personally took charge, forming death squads to purge all those figures. Thus the al-Dawa party and Maleki, for that matter, are responsible for the killing of Iraqi scientist, pilots and officers.

Also the WikiLeaks website revealed in this regard that the Iraqi Prime Minister and Commander in Chief ‘Nouri al-Maleki’ had handed over the information to Iran to be used for killing Iraqi pilots and high-ranking officers.

Also a deal was made between the United States and the Iranian regime during the 2010 elections to keep Maleki in power, and there’s no doubt in that. Nouri al-Maleki wanted to complete his unfinished destructive project he had started in 2006.

Mowafaq Rabiei former Iraqi National Security Advisor once asked Maleki ‘why did you target Tariq Hashemi?’ In response, Maleki says that “don’t ask me. Go ask Haji Ghasem. Ask it from Ghasem Soleimani.” (Commander of Iran Terrorist Quds Force) This was Maleki’s response. Thus, it’s quite clear that the decision to hit me was a completely political move initiated by the Iranian regime.

Tariq Hashemi revealed that the Obama administration had given Maleki the green light, allowing him to act as he wanted in this regard.

Previous articleIran: IRGC Must to Be Blacklisted, International Leaders call
Next articlePolitical Prisoner Addresses Iran Regime’s President: Lies and Hypocrisy for How Long?