Former American Hostage: Don’t Let Iran Get Away With Hostage-Taking 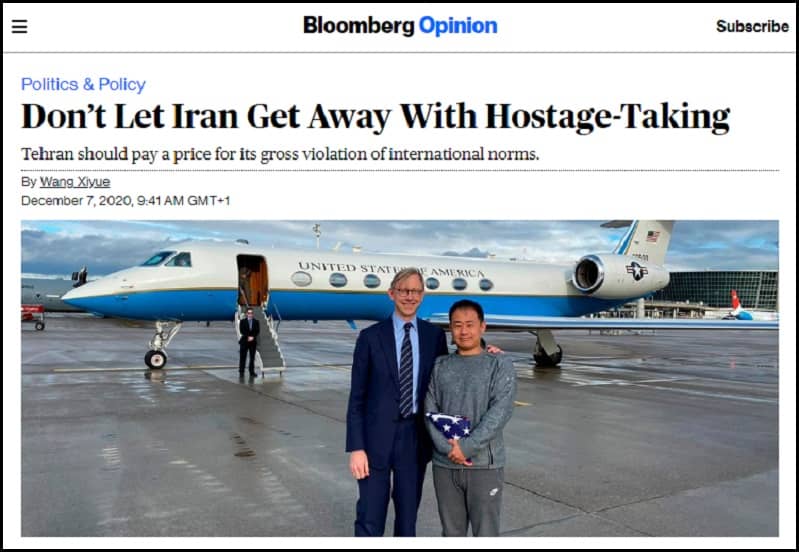 “To stop the Iranian regime’s hostage-taking, the international community must work together,” wrote Wang Xiyue, a former American hostage in Iran, on Bloomberg on December 7. The Iranian regime has been using hostage-taking as an extortion tool to achieve its malign goals. Simultaneous with the trial of their diplomat-terrorist, Assadollah Assadi, in Belgium for attempting to bomb the Iranian opposition’s 2018 Free Iran rally in Paris, the regime tried its card of hostage-taking to blackmail Belgium and have Assadi liberated.

On Thursday, December 3, simultaneous with the second session of Assadi’s trial, Iran announced it is going to execute Ahmad-Reza Djalali, Iranian-Swedish academic, who used to teach in Belgium.

Instead, due to international condemnation of this criminal decision and the Belgian Parliament’s strong reaction, the regime stopped Djalali’s execution.

Adopting a firm policy is the best way to counter the regime’s blackmailing campaign. The following is the full text of Mr. Xiyue’s article, which underlines that “Tehran should pay a price for its gross violation of international norms.”

One year ago, today, I was released from Iran as an American hostage in a prisoner swap. I went to Tehran in 2016 with little knowledge of its contemporary political reality. After a 40-month ordeal in the notorious Evin Prison, I left the country with the hard-learned knowledge that the Iranian regime is obdurately hostile toward the West, especially the U.S., and loathes diplomacy.

This year, as Thanksgiving approached, I could not help thinking of other hostages still held in Iran — at least 11 foreign nationals whose names are known to the public. Eight of them are in prison and three others are under house arrest.

Two days before Thanksgiving, I learned that the death sentence of my fellow inmate, Iranian-Swedish academic Ahmad Reza Djalali, has been reactivated, ostensibly a gambit against Europe ahead of the trial of an Iranian diplomat implicated in a thwarted attack in 2018. The Iranian judiciary informed Djalali’s lawyer that the sentence would be carried out very soon.

The scene of Moore-Gilbert waiting in the VIP lounge of Tehran’s Mehrabad Airport reminded me about how I myself anxiously awaited my departure from the country in that very place. While I am elated to see her returning home, a somber question looms large against the backdrop of Djalali’s imminent sentence: Why does the Iranian regime keep taking foreigners hostage as political leverage?

The simple answer is that this tactic always works. Starting from the U.S. Embassy hostage crisis in 1979, the regime has inevitably got something in return for releasing captive foreigners, be it some form of financial gain, repatriation of Iranian prisoners detained overseas or other political concessions from foreign governments. Inevitably, too, these swaps have been described as “diplomacy.”

But when the old hostages are sent home, the regime simply arrests new ones to replenish its stock of political pawns. The vicious circle is repeated.

The irony here is that the regime’s hostage-taking is in fact a manifestation of its anti-diplomacy orientation. The Islamic Republic, from its formation in 1979, has consistently defied international norms, and frequently rejected the use of diplomacy and dialog as means of mitigating its differences with other countries.

This is because of its revolutionary outlook and a unique, divine-sanctioned sense of hubris. No other state actor in the contemporary world has so frequently encouraged or tolerated the seizure and ransacking of foreign diplomatic representations. These are gross violations of the most basic diplomatic principles, but they are perfectly justifiable in the regime’s rhetoric of “revolution” and “quashing the global arrogance.”

Iran’s refusal to come to terms with the West and its neighbors have brought upon itself ever-increasing sanctions and economic isolation. To survive, the regime routinely recruits collaborators, offering handsome financial rewards for laundering money and circumventing sanctions. It also sends operatives abroad to assassinate political dissidents and foreign foes, and to carry out terrorist attacks.

The regime is committed to repatriate the perpetrators of these illicit activities detained overseas, to ensure the confidence and loyalty of current and would-be collaborators and operatives. The Iranian returnees in recent prisoner swaps have for the most part fallen into this category. My interrogators at Evin Prison made it clear that I was a pawn for prisoner exchange: “To get our brothers back, we will do anything!”

Foreign academics, independent businessmen, journalists and sometimes tourists are ideal targets for the regime’s hostage-taking, because they are relatively low-profile and lack political protection inside Iran. It is easy to concoct stories against them for domestic public opinion consumption. The regime has never convinced independent international bodies about the validity of any of the charges against foreign nationals.

Various branches of the Iranian intelligence services are the main perpetrators in this undertaking. While they have failed abjectly to thwart high-profile attacks, intelligence leaks, sabotage and assassinations — most recently the killing of the country’s top nuclear scientist — these agencies, aided by the judiciary, excel at fabricating security cases against foreigners. Gholamhossein Haidarifar, a fellow inmate of mine in Evin and also a notorious former judge who persecuted security cases, once told me with relish that in order to bring back an Iranian agent detained in Armenia, an intelligence agency arrested an Armenian film crew shooting film in Iran, for a prisoner swap.

Iran’s rival intelligence factions have institutional interests, and their case officers have personal motivation to perpetuate hostage-taking at the expenses of Iran’s international image and long-term national interest. The intelligence arm of the Islamic Revolutionary Guard Corps and the Ministry of Intelligence compete with each other for political capital through hostage-taking and prisoner swap deals. The case officers are rewarded with promotions and cash.

This backdrop is important to understanding Foreign Minister Mohammad Javad Zarif’s latest call for further prisoner swaps. It is inconceivable that a regime that takes citizens of other counties hostage can be sincere in engaging in diplomacy with those countries.

Should Iran really desire diplomacy, it can demonstrate goodwill by unconditionally releasing at least some foreigners held under spurious charges. But the regime, comfortable in its status as an international pariah, will likely continue its illicit activities abroad. Those who break foreign laws on its behalf will find themselves behind bars abroad, and the regime will continue to take hostages to enable prisoner swaps.

To stop the Iranian regime’s hostage-taking, the international community must work together. First, the perpetrators must be held responsible. Western states, including the U.S., the European Union, Britain, Canada and Australia, should ramp up targeted sanctions — using the Magnitsky legislation where possible — against Iranian entities and individuals involved in hostage-taking. These nations should forge a multilateral agreement to make concerted efforts against any state-sponsored hostage-taking, especially that of Iran. They should require the regime, as a precondition for any future political deal, to release all hostages and forswear hostage-taking in future. Nobody else should have to experience the ordeal I endured.

On Friday, a group of British lawmakers issued a statement on behalf of the International Committee of Parliamentarians for a Democratic Iran, in which...
Read more
Iran News Now

On February 9, 2021, Mahmoud Alavi, the Iranian regime’s Minister of Intelligence and Security, acknowledged in an unprecedented fashion that the mullahs are seeking...
Read more
Latest News on Iranian Terrorism