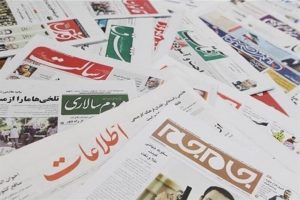 In recent days, Iran’s state media warned the regime’s officials of the “dangerous” consequences of their mismanagement, which has pushed people into the swamp of poverty and misery. Like the rest in the regime, these media outlets refused to offer a solution to the crises.

Keyhan daily, known as the mouthpiece of the regime’s Supreme Leader, Ali Khamenei, published a letter by 166 high ranking regime clerics from Khamenei’s faction, who blamed the rival faction for Iran’s economic freefall and warned of possible consequences.

“Today, inequality, unbridled poverty, daily or sometimes hourly increasing of prices, instability of prices, hoarding, systematic smuggling of goods through official instances, and the unstable situation of the market and stock exchange are pains of our society; and have caused an unbearable situation for people,” read the letter, published on December 8 in Keyhan.

This statement then warns the regime’s officials that people consider the entire ruling system as the reason for this situation. “People’s tables have shrunk, and they are angry with authorities,” the letter reads.

The increase in the income gap index in a country indicates the government’s economic mismanagement.

“Regarding the country’s current situation in terms of the income gap index, it is safe to say that what has happened now has been unprecedented in history. This level of income disparities between individuals has led to an unacceptable gap between lower-decile and upper-decile households. According to official estimates and independent economists in Tehran, an income of $300 is needed to provide a living to meet the health, education, and food needs of a family of four to five people. But workers and most employees earn half of this amount.” wrote the state-run Iran daily on Wednesday.

“After passing this stage, families face a situation of disorder that can have social and political consequences and lead to the disruption of public order. Care must be taken not to bring society closer to this stage. Unfortunately, it must be said that the deep gap between income and expenditure is now approaching the stage of high alarm in Iranian society,” wrote Iran daily, revealing the real concern of the regime, which is its security and an uprising.

The November 2019 uprising, which rattled the regime’s foundations, started due to the economic problems but soon became political, with people demanding regime change.  The major Iran protests in November 2019 have become the regime’s bitter nightmare.

While reminding the regime’s officials of the last uprising, Arman daily, on Wednesday wrote: “Considering the volume of citizens’ problems, an example of which we witnessed during the recent floods in Khuzestan, Bushehr, Fars and Hormozgan, the protest of different social strata against their living conditions is predictable.”

The regime is neither able nor willing to resolve economic issues. Thus, an uprising by those people who have nothing to lose is inevitable. Now, due to its domestic crisis and international isolation, the regime’s infightings have increased.

“People’s economic situation is not good. The high prices are unbearable. The inflation ravages people’s lives, and people ask when the rising inflation rate will end.  While people ask this question, the political quarrel between the Parliament and the government has escalated. In this sensitive situation, the society will not bear this,” wrote Resalat daily on Wednesday, referring to the recent infighting between the government and Parliament.

Now the situation is out of the regime’s control. In this regard, while comparing the regime’s situation to a patient who needs an emergency operation, Ebtekar daily warned the regime’s officials of a possible social backlash to its mismanagement.

“Surgery in non-emergency conditions will work better than emergency surgery. Or this situation will reach a point when the bitter truth slaps the decisionmakers,” Ebtekar wrote.