‘In explosions of holy sites … Iran is a pioneer’ 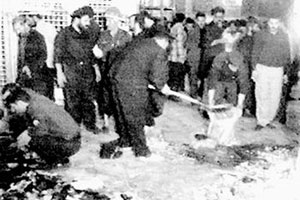 “ISIS, al-Qaeda or other terrorist groups are not the only parties that resort to such explosions with a political and sectarian agenda. There are countries such as Iran that fan the sectarian culture in the region and are behind some of the explosions. They target holy sites that belong to the Shiites, including in Iran, Iraq and mosques in Saudi Arabia with specific political objectives in the Arab region,” Alarabiya.net wrote in the Arabic edition of its website on Sunday.

“The first terrorist act against holy sites with political objectives was at the shrine of Imam Ali Bin Moussa al-Reza in the [Iranian] city of Mashhad on January 20, 1994 where 26 pilgrims were killed and hundreds injured. This terrorist attack was carried out by the Iranian Intelligence Ministry that is under the supervision of Iranian supreme leader Khamenei. This operation happened well before al-Qaeda became famous for its terrorist activities, and it was years before the rise of ISIS,” the report quoted Iran expert Wojdan Abdulrahman al-Afrawi as saying.

The report added: “At the time, Khamenei claimed that the People’s Mojahedin Organization [PMOI/MEK] that had entered into armed resistance against the Islamic Republic was behind the explosion. The objective of this heinous and criminal operation was to smear this organization, but the reality became clear later on.”

“The [then-deputy] intelligence ministry chief Saeed Emami –a close confidant of the supreme leader at the time – staged this explosion. Later, they brought a prisoner called Mehdi Nahvi, who was a PMOI [MEK] member on death row, to make a false confession in front of TV cameras that he had been responsible for the explosion.”

“To complete this narrative and scenario, an intelligence element approached Mehdi Nahvi and persuaded him to escape during his transfer to hospital, but at the same time they laid a trap to kill him in one of Tehran’s busy squares.”

“However, five years later, when the intelligence chief Saeed Emami was arrested following the serial killings of politicians, intellectuals, journalists and poets in Iran during Khatami’s Presidency, this plot was exposed. Saeed Emami confessed to the blowing up of the Imam Reza shrine. He stated that the objective was to taint the PMOI. His confessions were published by many newspapers in Iran at the time. He similarly acknowledged that the explosion of Sunni mosques in Baluchistan and that of the Imam Reza shrine had been implemented by the intelligence ministry.”

“On February 22, 2006, the shrines of the 10th and 11th [Shiite] Imams, Seyyed Ali al-Hadi and Seyyed Hassan al-Askari were blown up [in Iraq]. All Iraqis condemned this criminal act and the cruel crimes that ensued which involved attacks on hundreds of Sunni mosques and the slaughter of hundreds of innocent citizens.”

“Through statements by US officials and intelligence agencies it was made plain that Iran was behind the explosion of the two shrines in Iraq.”

“The motive behind the explosions in Iraq was clear. It was aimed at alleging that Sunnis were behind the operation. After that, the Badr forces and Solaq Special Forces killed thousands of Sunnis and destroyed their mosques so that many more of them would be killed. In fact, this plot was carried out after the explosion such that dozens of mosques were torched and hundreds of Sunni imams were killed.”

“But the motive behind the explosions in the Gulf States, after the destruction of Iraq and intensified sectarianism, is to instigate sedition amongst the people and destroy the national solidarity that exists in these countries in order to damage these countries; a plan that only benefits ‘Iran’ and ‘ISIS’,” the report added.