NCRI – At a press conference held in London on March 7, 2016, the National Council of Resistance of Iran (NCRI) released information gathered by the People’s Mojahedin Organization of Iran (PMOI/MEK) network within Iran that identified three companies, which are used as fronts to engage in smuggling arms within the region. Dr. Matthew Offord, Conservative MP, also attended to address Iran’s malign influence in the Middle East. 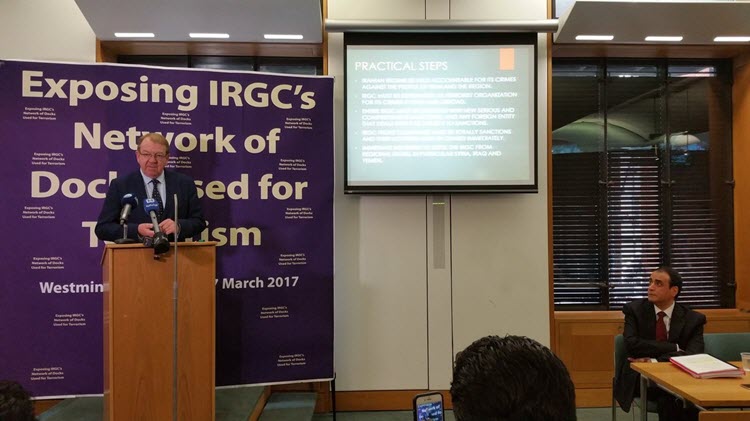 The press conference included details and previously unseen intelligence on the number of IRGC companies involved in exporting weapons to the regional groups affiliated with the Iranian regime, particularly those operating in Yemen, which has been under sea blockade since 2015. The press conference included the release of the joint study by European Parliament’s Delegation for Relations with Iraq (EIFA) and the International Committee in Search of Justice (ISJ) titled, “Destructive Role of Islamic Revolutionary Guards Corps (IRGC) in the Middle East”.

Subsequent to the closure of the docks in Yemen to the regime’s ships, the IRGC companies use the ports in Oman to smuggle weapons to Yemen. Three ports being used primarily for these activities are the Soltan Qaboos Port in Muscat; Sohar Port in North Oman; and the Salalah Port in South Oman.

The first of the three companies, Admiral Group Shipping Company, started its activities in 2012 and it is owned by Ali Shamkhani’s children. He is a former Commander of the IRGC Naval Force and former Minister of Defense. Currently, Shamkhani is the Secretary of the Supreme National Security Council. The main directors of the group are Hossein and Hassan Shamkhani.

The company, which has offices in Tehran and Dubai, has been operating in the Persian Gulf region and it is now expanding its activities to the Indian Subcontinent and Far East. Within five years, the company went from one vessel to nine. Using this company, the IRGC has engaged in dispatching arms to Yemen. After the closure of direct sea routes to Yemen in 2015, arms were subsequently transferred to Yemen through land borders by unloading at docks in Oman. Some of the arms that were dispatched include AK47 machine guns, RPG rocket launches, explosives, caches and mines.

The Hafez Darya Arya Shipping Company is used as the container transport of several IRGC companies and they have a fleet of 29 vessels for transporting containers. This company uses docks in Port Asalouyeh, Bandar Abbas, and Bushehr to cargo good that belong to the IRGC.

Additionally, the company transports containers for the IRGC’s major engineering arm. Their containers carry cargos to scores of countries in the region and globally, including to the UAE, Qatar, Iraq, Kuwait, Oman, Bahrain, and Saudi Arabia. Currently, the company cannot deliver to its cargo to the Port Hodeideh in Yemen due to the sea blockade.

The Valfajr shipping company was founded by the IRGC in 1986 and was named after Valfajr8, an IRGC operation during the Iran-Iraq war in 1985. The company is affiliated with Khatam-al-Anbiya and carries IRGC cargos and consignments. It is very active in transferring the IRGC consignments to Yemen through Muscat. During this process, the company’s vessels move the cargo not using the Iranian flag in order not to be identified or searched and do not create sensitivities. IRGC vessels are used by the company and operated by them to carry containers and other goods.

Throughout the conference, additional details about the companies’ operations were released. This included information about the 90 docks in control of the IRGC, which represents 45% of the docks in Iran. “Import and export of illicit goods from these docks amount to 12 billion dollars annually,” according to the NCRI report. According to reliable intelligence obtained by the sources of the People’s Mojahedin Organization of Iran (PMOI/MEK), Ali Khamenei pressed for expansion of activities of these docks and IRGC’s increased economic engagements, particularly to evade international sanctions. Based on Khamenei’s direct order, no authority is allowed to oversee the activities of the IRGC at border areas, including the land, sea or air docks.
The National Council of Resistance of Iran (NCRI) is a broad coalition of democratic Iranian organizations, groups, and personalities, founded in 1981 in Tehran. The NCRI is committed to a secular and democratic Iran, based on the separation of religion and state. They were instrumental in revealing Iran’s nuclear weapons program in 2002.

Previous articleU.N. Special Rapporteur Concerned About the Continued Practice of Public Execution in Iran
Next articleCommemorating International Women’s Day on the Eve of March 8 in Stockholm, Oslo, the Hague and Gothenburg