U.N. Special Rapporteur Concerned About the Continued Practice of Public Execution in Iran 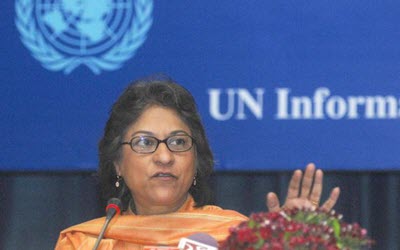 She says that the situation in areas like independence of judiciary and lawyers, freedom of expression, and use of arbitrary detentions continue to be of serious concern.

Human rights organizations tracking executions in Iran estimate that at least 530 executions took place in 2016. The majority of these executions were for not the “most serious” drug-related offences. Drug offenders are often deprived of basic due process and fair trials. They are held in long periods of incommunicado and pretrial detention, lack adequate access to a lawyer and/or to a proper defence, there are allegations that drug offenders are subjected to beatings and coerced confessions which are later used in revolutionary courts to secure their death sentences. The recently amended Criminal Procedure Code which mandates that all death sentences, including those for drug offences be reviewed by the Supreme Court does not seem to have led to any significant change in this respect.

The Special Rapporteur was also concerned about the continued practice of public execution. It is reported that some executions took place in public places in the presence of children, this has however been denied by the State Party.

The Islamic Republic of Iran has reportedly executed the highest number of juvenile offenders in the world during the past decade. Despite an absolute ban on the practice under international law, the Iranian penal code continues to explicitly retain the death penalty for boys of at least fifteen years of age and girls of at least 9years for qisas (retribution in kind) or hudud crimes, like homicide, adultery or sodomy. As a result of the 2013 amendments to the penal code, judges are now required to assess the mental capacity of juvenile offenders before issuing a death sentence to determine if they understood the consequences of their actions at the time they committed hudud-related crimes.

Ms. Asma Jahangir notes as positive the adoption of article 1197 of the Code of Criminal Procedure, which acknowledges the right of the accused to remain silent during preliminary investigations, and of article 60, which explicitly prohibits the use of coercion, obscene/derogatory language, suggestive/deceptive or irrelevant questioning. However, she noticed that forms of torture are not defined in Iranian law and that the new code has not established the necessary procedures for investigating torture allegations. She also received numerous documented cases of persons allegedly subjected to torture and ill treatment with the view to extracting confessions from them. The practice of prolonged period in solitary confinement was documented and there are also numerous reports and instances where prisoners were deprived of family visits and/or of medical care.

In a report it published in July 2016, a non-governmental source highlighted 18 cases of denial of medical treatment and indicated that the objective of this practice was to intimidate and punish political prisoners and prisoners of conscience.

In the case of Ms. Akbari Monfared, who was serving a 15 years in prison in relation to her membership in the banned opposition group known as the People’s Mojahedin OrganizationIran (PMOI), the denial of medical treatment reportedly took place after she published a letter demanding justice for her brothers and sisters who were reportedly executed in 1988. The Government responded to most of these cases indicating that prisoners were in good health condition and that they were benefiting from proper health and medical facilities.

In June, Ms. Narges Mohammadi, a prominent human rights activist went on her hunger strike for 20 days to regain access to her children. According to the Government, she was sentenced to one year in prison for propaganda against the system, five years in prison for assembly and colluding against the national security, and ten years for establishing and running an unlicensed and illegal group. The sentences run concurrently, and thus she is serving ten years’ imprisonment.

In December, Ms. Nazanin Ratcliffe a British-Iranian charity worker whose detention was considered as arbitrary by the United Nations Working Group on Arbitrary Detention, was reportedly pressured to choose between moving her two-year-old daughter into prison or signing a document renouncing all her rights regarding her child.At least 50 lawyers have reportedly been prosecuted since June 2009 for representing prisoners of conscience, political detainees or “national security” prisoners. On 20 May 2016, the Special Rapporteur’s predecessor and other United Nations experts issued a joint statement expressing concern about the situation of lawyers and human rights defenders, serving heavy sentences for their peaceful activities or simply for carrying out their professional duties. The experts noted that in addition to detaining human rights lawyers, their continued targeting and harassment by the authorities had apparently “forced some lawyers to limit their professional activities or leave the profession altogether.”

The Special Rapporteur welcomes the declaration made by President Rouhani in November about the necessity for news media to feel safe while doing their jobs and notes that similar declaration had been made in the past. However, on 18 May 2016, Iran’s parliament adopted the Political Crimes Bill, which mandates the Judiciary to prosecute such crimes in open court, before a jury. Certain provisions of this law, including Article 1 appear to criminalize attempts to “reform the country’s policies,” and Article 2 reaffirms the Government’s authority to criminalize the “publication of lies,” as well as insults or defamation against government officials such as the president and his deputies, the head of the judiciary, and parliamentary members. Moreover, the Government is reportedly preparing to introduce two bills to parliament, which, if passed, could further erode press freedom and freedom of expression in the country. The first bill is designed to replace the current restrictive Press Law, and the second would establish a state organization. Under Articles 609 and 698, of the Islamic Penal Code, criticizing government officials or publishing false news is punishable by 74 lashes. The government however drew the attention of the Special Rapporteur to the fact that “in Iran insulting committed leaders, great personalities and thinkers, is unthinkable and many countries including Iran have criminalised such insulting behaviours”.

Ms. Asma Jahangir regrets that no progress has been made towards the ratification of the Convention on the Elimination of Discrimination against Women and the elimination of legal provisions, which discriminate women in various fields. It is particularly disturbing that blatantly discriminatory provisions such as those contained in the penal code which stipulates that the value of a woman’s life is equal to half of a man’s remain in force in the country. Of concern is also possible adoption of new discriminatory legal provisions against women.

Child marriage remains legally possible for girls aged 13 and for boys aged 15. Even younger children can be married with the permission of the court but the marriage may not be consummated until puberty. In June, a spokesperson for the Tehran-based Association to Protect the Rights of Children stated that child marriages had reached alarming levels and stressed that approximately 17 percent of all marriages in the country involve girls married with old men. Forced marriages are though prohibited by law.

And still, discriminatory laws and regulations that require women to observe the Islamic dress code, or hijab, continue to be enforced by security and law enforcement officials but also by citizens in accordance with the 2015 legislation.

The situation of recognized and unrecognized religious minorities remains a matter of serious concern. Bahai’s continue to be systematically discriminated, targeted, and deprived them of the right to a livelihood. The Special Rapporteur urges the authorities to recognize that freedom of religion or belief entails the freedom to choose a religion or belief, and that measures restricting eligibility for civil, political, social or economic privileges, or imposing special restrictions on the practice of other faiths, violate the prohibition of discrimination based on religion or belief and the guarantee of equal protection under article 26 of the International Covenant on Civil and Political Rights.