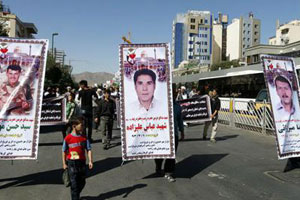 NCRI – At least seven members of the Iranian regime’s Revolutionary Guards Corp who have been killed fighting against Syrian people have been buried in a number of cities across Iran.

Another IRGC member identified as Amanullah Shirali was buried in city of Kashan on June 28.

An Afghan citizen, Najibollah Moradi, member the Iranian regime’s Quds Force was buried in southern city of Shiraz on June 25. Another IRGC member was buried along with him but his identity has not been revealed.

Heshamtollah Soharbi was buried in southwestern province of Ilam on June 25.