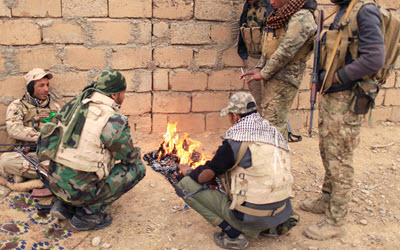 What is Iran’s ‘national treasure’ in Iraq?

Heshmat Alavi’s, Special to Al Arabiya English Monday, 19 December 2016 is a must read, here is the full text of the article.

This entire entity is believed to be comprised of mercenaries with bloody pasts of atrocious crimes, especially targeting the Sunni communities of Iraq and Syria.

“Iraq’s Shiite militias are becoming as great a danger as Daesh (ISIS/ISIL),” Phillip Smyth had said in his in-depth Foreign Policy piece back in 2014.

It is worth noting that the PMU is an offspring of the Iranian regime’s mentality and financial support. While first dubbed as a “short-term” fix to back the Iraqi military, the PMU refused to disband after Daesh suffered setbacks in central Iraq. Iran-backed militia leaders in Iraq demand the PMU be recognized as Iraq’s version of Iran’s Revolutionary Guards, seeking a political/military role to undermine core Iraqi institutions, including the army and Ministry of Interior.

“PMU leaders were raised in the arms of Iran,” said PMU official Hamid al-Jaziri, as quoted by Iran’s state-run Mizan news agency. The PMU boasts of being a “state under the jurisdiction of the Guardianship of the Islamic Jurist [Khamenei], and does not recognize borders.”

Iraq has “endorsed [Iranian Quds Force commander Qassem] Soleimani with ‘all the powers,’” adding “the popular mobilization forces considers Soleimani a delegate of Khamenei in Iraq.” Soleimani, known for his significant role in the PMU’s foundation, is designated as a wanted “terrorist” by US authorities. Suleimani was also spotted in Aleppo during the recent massacre of civilians that shocked the world over.

The PMU is no grass-root organization, consisting of an alliance of numerous Iran-backed Shiite militia groups each with a horrific history of unspeakable crimes. The Badr Organization, Asaib al-Haq and Kata’ib Hezbollah are militias with deep ideological relations with Iran and records of waging deadly wars also against American troops during their stay in Iraq.

Over 50 Shiite militia groups are currently enrolling and luring troops from the Iraqi army and police, while embedding their ranks and files within the Iraqi government. Iran is developing and nurturing Iraq’s Shiite militias. From May 2013 onward Tehran has expanded and further empowered its network of such proxies to guarantee an ongoing stream of fighters for Syria.

Iran has purposefully established an array of different groups, depicting a portrait of vast popular support for Shiite militia promoting Tehran’s ideology and policies. This constellation is cloaking official Iraqi institutions, and paving the paths for lethal conflicts for decades to come.

As Shiite militias coat their armored hardware with images of Iranian regime founder Ruhollah Khomeini, rest assured the billion-plus Sunnis will have scores to settle.

The Asaib al-Haq is an active Iranian proxy group in Iraq, with roots going back to the 2003 Iraq war when its members splintered from the Mahdi Army of Moqtada al-Sadr. Asaib gained a high level of infamy after kidnapping and executing American soldiers and British contractors. Asaib is known to dispatch many members to Syria and in 2014 take part in the massive assault against the Sunni communities of Anbar Province, who opposed then-Iraqi prime minister Nouri al-Maliki, known for his very close ties to Iran.

Kataib Hezbollah militia is responsible for some of the most lethal attacks against US and coalition forces throughout the war. Both Asaib and Kataib have also been busy committing atrocities against the Sunnis, as such have long complained about Shiite fighters kidnapping and killing civilians, Reuters reported.

Ironically, the US under Obama reached the point of providing air cover for Iran’s Shiite militias in Iraq, while they committed “some of the worst human rights abuses on the planet.”

Sunnis are further pushed to the sidelines in Iraq due to US President Barack Obama’s premature withdrawal of American boots and wrong policies. The latest such example is seen in the Shiite majority Iraqi parliament granting legal status to the PMU, leaving the Sunnis outraged.

The PMU also has plans to take part in the atrocities against Syrian civilians to shore up Levant dictator Bashar Assad, following their push against Daesh (ISIS/ISIL) in Mosul, northern Iraq. Prior to this thousands of Iraqi Shiite militias were known to have been dispatched to Syria to fight for Assad.

“Iran’s most powerful proxies in Iraq have worked closely together to prop up the Assad regime in Damascus. Kataib Hezbollah and Badr formed the Kataib Sayyid al-Shuhada (“The Master of the Martyrs Brigade,” or KSS) in early 2013 to fight in Syria. KSS is led in part by Abu Mustafa al-Sheibani, a commander affiliated with both Badr and the Iranian Islamic Revolutionary Guard Corps’ Quds Force,” reported Phillip Smyth in his Foreign Policy piece, ‘All the Ayatollah’s Men.’

“When the fighting erupted in our areas, we carried out some joint military operations side by side with the Syrian army to clean up areas seized by rebels,” said Abu Hajar, an Iraqi member of the Abu al-Fadhal al-Abbas brigade, formed by Iran and consisting of “500 Iraqi, Syrian and some other nationalities.”

“We have no clear battlefield, but, from time to time, we carry out raids with the army on the sites of the Free Syrian Army,” said another member, proving ISIS has never been the target of the pro-Assad camp.

The rise of such Iran-backed Shiite militias proves Tehran’s objective of dominating all of Iraq, Syria and beyond. These groups have shown they march only to Iran’s ideological tune, loyal only to Khamenei and his despotic perspective.

These Shiite militias share one very concerning characteristic with ISIS: not recognizing any internationally recognized borders and seeking to spread Tehran’s mantra of “Islamic Revolution.”

However, they have evolved to be far more dangerous than ISIS by exploiting Iraq’s so-called democratic system to pursue Iran’s political agenda in Mesopotamia, the Levant and forward. This has reached the point where they no longer answer to Baghdad, but to Tehran. This has been the unfortunate result of Obama’s engagement policy with Iran to safeguard his “legacy” Iran nuclear deal, at the cost of giftwrapping Baghdad to Tehran.

Iraq has reached the point where Iran’s deep threat has perpetuated sectarian conflict across the land, and Tehran is now calling on Washington to “leave Iraq to us.”

The new administration in Washington must recognize the fact that Iran-backed Shiite militias represent a clear and present danger to the entire region, and the world. Once Iraqi soil is rid of ISIS, this country is doomed to the abyss of sectarian conflict.

Iran-backed Shiite militias “represent enemies of a stable, secure, and inclusive Iraq,” and that once the ISIS threat is defeated, “they will very likely turn on us,” as explained by Lt. Gen. Michael Flynn, former Defense Intelligence Agency director and Donald Trump’s current nominee for national security advisor.