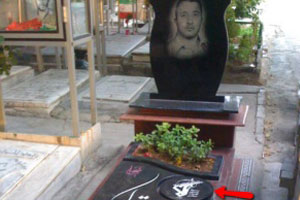 NCRI – The body of a member of the Iranian regime’s Revolutionary Guards Corp (IRGC) was buried in Tehran on Sunday.

Mehdi Azizi had been killed in clashes in Syria on Friday, Mashregh news reported.

Body of another IRGC member, Reza Kargar will be buried today in Terhan, according to the reports.

In the past few months bodies of a number of IRGC members have been buried in cities across Iran.

The body of a member of the Iranian regime’s Revolutionary Guards Corp (IRGC) was buried in the city southern Iranian city of Ahvaz on July 8 at the presence of a group of military commanders. The body had been transferred from Syria to Iran on the previous day.
He was identified as Mehdi Moussavi, a deputy commander of Bassij force in Ahvaz and a member of the group named ‘defenders of the shrine of Zeinab’.

The Iranian regime’s forces are fighting for Syrian dictator Bashar Al-Assad under the pretext of defending holy shrines in that country.

In June, bodies of 4 other members of the revolutionary guards who were killed in the clashes in Syria, were buried in different cities of Iran.