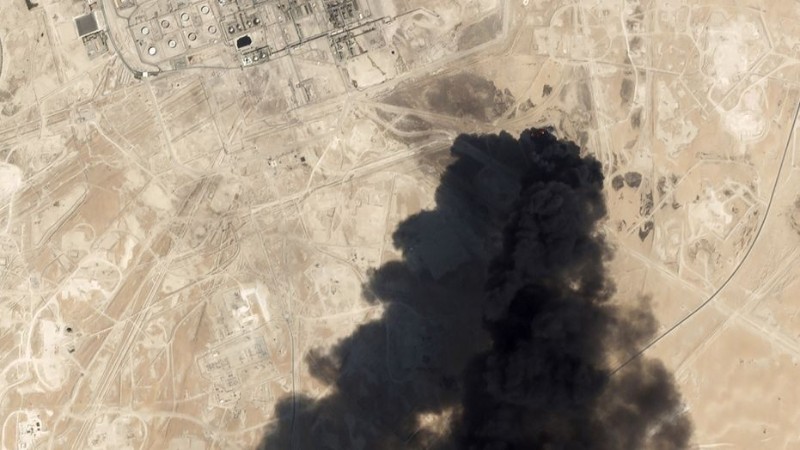 Iran’s regime was responsible for an attack on Saudi Arabia’s oil facilities over the weekend that cut into global energy supplies and halved the kingdom’s oil production.

United States President Donald Trump said on Sunday Washington was “locked and loaded” for a potential response to the attack, after a senior U.S. administration official said Iran’s regime was to blame. The U.S. also released new evidence to back up its allegation that Iran’s regime was responsible for the assault.

President Trump said the U.S. had reason to believe it knew who was behind the attack — his Secretary of State had blamed Iran’s regime the previous day — and assured his Twitter followers that “we are … locked and loaded” depending on verification and were waiting to hear from the Saudis as to who they believe was behind the attack and “under what terms we would proceed!”

“Amid all the calls for de-escalation, Iran has now launched an unprecedented attack on the world’s energy supply,” Secretary Pompeo tweeted. “There is no evidence the attacks came from Yemen.”

A senior administration official briefed CNN on information to back up Secretary Pompeo’s claims.

The official pointed to the angle at which Saudi oil facilities were attacked, the numbers of points of impact and other information to argue that it is unlikely the attacks were carried out by Yemen. Instead, the official suggested the attack most likely originated in Iran or Iraq.

“It is very difficult to see how these things could have come from anywhere but Iran or Iraq,” the senior administration official said.

The official said 19 Saudi targets were struck in Saturday’s attack and argued that such an attack could not be carried out with 10 drones, which the Houthis claimed to have used.

“You can’t hit 19 targets with 10 drones like that,” the official said.

The official, drawing on commercial satellite imagery shared with CNN, also noted that “all the points of impact on Saudi facilities were on the northwest side of them, which is somewhat difficult to do from Yemen.”

An anonymous U.S. official told the Associated Press all options, including a military response, were on the table, but said no decisions had been made Sunday.

Hours earlier, senior U.S. officials told the AP satellite imagery and other intelligence showed the strike was inconsistent with one launched from Yemen, where Iranian-backed Houthi rebels had claimed responsibility.

As a reminder, on November 3, 2018, Ahmad Alamalhoda, Khamenei’s representative in the city of Mashhad, clearly made threats tracing the path of the mullahs’ regime today.
“Ghaher missiles, along with the necessary technology, have been provided to the Ansarollah (Houthis)… Once Iran issues its orders, these are enough for the Saudi Aramco oil facility. It will be able to take down all these oil facilities,” he said.

Meanwhile, a commander of the regime’s terrorist Islamic Revolutionary Guards Corps (IRGC) reiterated its forces could strike U.S. military bases across the Middle East with their arsenal of ballistic missiles.

Brig. Gen. Amir Ali Hajizadeh, who leads the regime’s aerospace program, said in an interview published across Iranian media Sunday that Revolutionary Guard forces were ready for a counterattack if America responded, naming the Al-Udeid Air Base in Qatar and Al-Dhafra Air Base near Abu Dhabi in the United Arab Emirates as immediate targets, as well as U.S. Navy ships in the Persian Gulf and the Arabian Sea.

“Wherever they are, it only takes one spark and we hit their vessels, their airbases, their troops,” he said in a video published online with English subtitles.

The U.S. government produced satellite photos showing what officials said were at least 19 points of impact at two Saudi energy facilities, including damage at the heart of the kingdom’s crucial oil processing plant at Abqaiq. Officials said the photos show impacts consistent with the attack coming from the direction of Iran or Iraq, rather than from Yemen to the south.

Iraq denied Sunday that its territory was used for an attack on the Kingdom and U.S. officials said a strike from there would be a violation of Iraq’s sovereignty.

The U.S. officials said additional devices, which apparently didn’t reach their targets, were recovered northwest of the facilities and are being jointly analyzed by Saudi and American intelligence, the AP reported.

The attack Saturday on Saudi Arabia’s Abqaiq plant and its Khurais oil field led to the interruption of an estimated 5.7 million barrels of the kingdom’s crude oil production per day, equivalent to more than 5% of the world’s daily supply.

President Trump said he had approved the release of U.S. strategic petroleum reserves “if needed” to stabilize energy markets. The president said the final amount of the release, if any, would be “sufficient to keep the markets well-supplied.”

Images from the European Commission’s Sentinel-2 satellite examined by the AP showed black char marks at the heart of the Abqaiq plant on Sunday, marks not seen over the prior month. Identical marks are visible on the U.S. imagery. The Washington-based Center for Strategic and International Studies in August identified the area with the char marks as the plant’s stabilization area. The center said the area includes “storage tanks and processing and compressor trains — which greatly increases the likelihood of a strike successfully disrupting or destroying its operations.”

With the U.N. General Assembly taking place in a little over a week, there had been speculation of a potential meeting between President Trump and the regime’s President Hassan Rouhani on the summit’s sidelines, possibly in exchange for the lifting of some economic sanctions imposed on the regime.

But President Trump seemed to reject that idea Sunday night, tweeting: “The Fake News is saying that I am willing to meet with Iran, ‘No Conditions.’ That is an incorrect statement (as usual!).”

U.N. Secretary-General Antonio Guterres condemned Saturday’s attacks and called on all parties to exercise restraint and prevent any escalation.