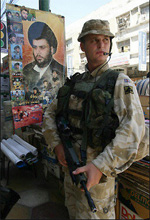 Financial Times, October 6 – Rarely have British officials been so outspoken in criticising Iran. London has always been cautious in linking Tehran with the insurgency that has dogged efforts to rebuild Iraq after the US-led invasion. Yesterday, though, just days ahead of a crucial vote on the country’s new constitution, something snapped.

The warning to Tehran that it stop interfering in its neighbour’s affairs reflects long-standing western concern that elements of the Iranian regime have been in contact with Sunni insurgents and a faction of a radical Shia group.

More than that, diplomats say the Iranian Revolutionary Guard is suspected of having supplied these groups with weapons technology that has been used to devastating effect in attacks on US and British forces.

The timing of yesterday’s comments from a senior official shows just how much is at stake for the US and UK as they try to manage the run-up to elections that are due to be held at the end of the year. There appears to be mounting concern, too, that Iran has recently stepped up its activity in Iraq to put pressure on the US and UK in the dispute over its nuclear ambitions. All this points to a serious deterioration in relations between London and Tehran.

Britain has long recognised that Iran has legitimate political interests in Iraq and strong alliances with Shia groups that now dominate the government. But some Iraqi politicians have complained that British authorities in Basra have been too complacent about Iranian interference and the presence of intelligence agents in southern Iraq.

Since the removal of the Saddam Hussein regime, Iraqi and British officials say Iran has largely used its growing influence to help stabilise Iraq and ensure that its Shia friends dominate the country’s leadership.

That view has now changed. The belief in London is that the links between the Iranians and a breakaway faction of the Mahdi army, the Shia militia headed by radical cleric Moqtada al-Sadr, and contact with some Sunni extremist groups, are no longer benign.

It is the breakaway faction of the Mahdi army – the militia that rose against American troops in the past but has been co-opted into the political process – that is suspected of being behind the capture by Iraqi police of the two UK special forces members in Basra last month. The incident led British troops to storm a jail.

The Sunni groups, however, are fighting against the interests of Iran’s own Shia allies, and trying to undermine a government that Tehran backs.

"I don’t think it is for a benign purpose," insisted the British official. "If part of the aim was to tie down the coalition in Iraq, it would be entirely consistent with supporting those groups."

US warnings about Iranian support for Sunni Arab insurgents date back at least to the summer, when US officers noted that attacks on US patrols were becoming fewer but more effective.

Iran denies the charges, dismissing them as an attempt to divert attention away from failures by the US and British to defeat the insurgency.

Ali Larijani, head of Iran’s Supreme National Security Council – which deals with nuclear issues as well – was quoted on Tuesday by Sisayat-e Rouz daily as saying: "If pressured by America, Iran will use its full might to endanger America’s interests."

Relations between the UK and Iran deteriorated this summer. European governments last month backed the US in persuading the governing board of the International Atomic Energy Agency to find Iran in "non-compliance" with the nuclear non-proliferation treaty, so paving the way for referral to the Security Council in November. The move came after the collapse of negotiations led by the UK, France and Germany.