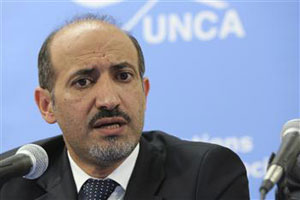 AFP – Opposition leader Ahmad Jarba said Syria is now being run by regime allies Iran and Lebanon’s Hezbollah, with President Bashar al-Assad out of the picture, in an interview published Sunday.
Jarba also told Saudi-owned newspaper Al-Hayat that Syrian rebels have seized control of “at least half” of the country, 29 months into an anti-Assad uprising.

Assad is “a killer and a criminal, and… he has collapsed,” the National Coalition chief charged.
The opposition leader reiterated the rebels’ insistence that any settlement must exclude Assad, demanding that he be “punished for the war crimes he has committed against the Syrian people”.
More than 100,000 people have been killed since the conflict broke out in mid-March 2011, the UN says.
Assad “no longer runs Syria. The real rulers of Syria are the Iranian (elite) Revolutionary Guard… with the participation of (Lebanese Shiite) Hezbollah fighters,” Jarba said.
Tehran is Assad’s main regional backer, while Hezbollah has sent in troops from Lebanon to help the army fight the anti-regime rebellion.
Jarba said that supplying the rebel Free Syrian Army with sophisticated weaponry would “change the course of the revolution,” despite Western fears that the arms could land in the hands of extremists.