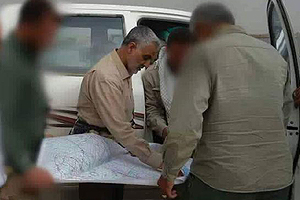 The authenticity of the photographs that were published in social media could not been verified, however, US military and intelligence officials have told The Long War Journal that Suleimani was in Iraq visiting with Shiite militias and commanders over the past several days.

In one grainy photograph, which is said to be from Iraq’s Anbar province, Suleimani is photographed in the desert with a group of Iraqis dressed in military fatigues (above). In another photograph (below), Suleimani is standing outside of a Toyota Hi-Lux reviewing a map with other men. The faces of the men are blurred.

Abu Mahdi al- Muhandis who worked with the Iranian regime’s Revolutionary Guard in Kuwait in 1983 organizing terrorist attacks against foreign embassies is the leader of Kataib Hezbollah.

In 2009 the U.S. Treasury department sanctioned Muhandis for his role in committing and facilitating attacks against U.S. and Iraqi forces.

Meanwhile, a senior Iranian military officer, Jassem Nouri, who had also served as a military adviser in Syria, was killed on Thursday, the Dawn reports.

The slain military officer’s memorial service was attended by his family members and political and military leaders in Ahvaz in southwestern Iran on Sunday, ahead of his burial on Monday.