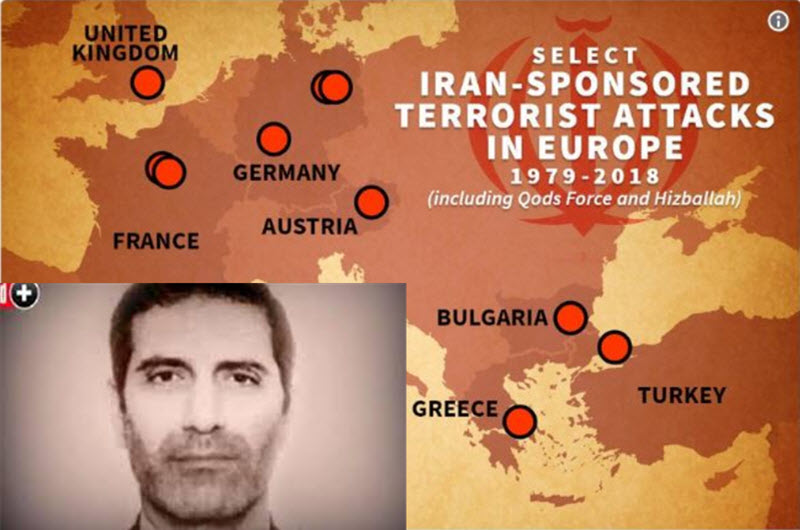 The Iranian regime was once known as a state that carried out assassinations of its citizens abroad. However, its reputation had been forgotten for a long time and it seemed like the Iranian regime had abandoned this practice that was a common occurrence during the eighties and nineties.

Yet, recent incidents show us that the Iranian regime has gone back to its old tricks. In three separate cities across Europe, we have proof that Iran is still plotting.
The regime’s activities in Europe show how much of a threat the opposition is to the survival of the regime. On 30th June this year, the National Council of Resistance of Iran (NCRI) held its annual gathering just outside Paris. Every year, tens of thousands of Iranians from around the world gather to hear politicians, lawmakers, members of parliament, human rights activists, and so on, speak at the opposition’s rally for a free Iran.

Belgian authorities arrested a Belgian-Iranian couple who were on their way to the event. They were caught with 500 grams of TAPT (an explosive often used by terrorists) as well as a detonator.

The day after their arrest, Assadollah Assadi, an Iranian diplomat based in Austria, was arrested in Germany while he was on his way home to Vienna where he has diplomatic immunity. He was the one that ordered the terrorist attack near Paris.

Authorities in Denmark said that Iran was plotting to carry out an attack in the country and that the targets were three activists. Denmark’s intelligence agency said that an individual was spotted photographing the house in which a spokesperson for the separatist Arab Struggle Movement for the Liberation of Ahvaz (ASMLA) group lived. The authorities also said that the photos would have then been sent back to Iran where an attack would have been planned and prepared.

The Foreign Minister of Denmark, Anders Samuelsen, has described the situation as “totally unacceptable”. British Prime Minister Theresa May was in Oslo at the time of the news breaking and she confirmed that Britain supports Denmark in this fight against terrorism. Denmark has been discussing potential action with other European leaders.

The Danish police realised that the individual living in the house, Yaqoub al-Tostari, would have been kidnapped or assassinated very soon after had they not intervened.
Tostari had recently spoken about the attack on the Iranian military parade that took place in September, publicly defending it.

So all this points to the Iranian regime going back to previous tactics of eliminating opposition members abroad. It is not enough for the regime to brutally suppress the Iranians at home.

Since the end of last year, the people of Iran have been making it very clear that they want regime change. They are fed up with the intolerable acts of oppression that they face on a daily basis and the cruelty that so many political prisoners face.