Iraq: pro-Iran militias should be placed on international terrorist lists 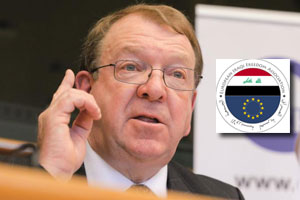 The dreadful atrocities of the Shi’ite militias affiliated with the Iranian regime in various regions of Iraq, including Meqhdadiya, and the abductions perpetrated by them, including the three Americans in Baghdad and formerly a group of Qatari citizens in the south, have exacerbated the crises engulfing Iraq.

The most murderous militia organisations affiliated with Iran are the Badr Corps, Asa’ib Ahl al-Haq (AAH) and the Iraqi Hezbollah. These militias use state resources to suppress and massacre Sunnis and the Shiites who oppose the Iranian regime’s interference in Iraq. During Nuri al-Maliki’s 8-year tenure as prime minister, these militias enjoyed the complete support of the government. According to documented reports by Amnesty International, Human Rights Watch and the UN Human Rights Council, these militias carried out their crimes using state resources. They had assassination teams that murdered Iraqi political figures, former officers, physicians and experts.

After the removal of Maliki from power and the establishment of the Popular Mobilisation Force or Hashd al-Shaabi that is bankrolled by the government and is officially under the Prime Minister’s control to combat Daesh, these militias grasped the opportunity and practically took over control of Hashd al-Shaabi to advance the objectives of the Iranian regime.

In view of the fact that in recent days the most prominent religious leaders and Shi’ia and Sunni political figures have called for the disarming of the militias affiliated with the Iranian regime, it is imperative to show firmness vis-à-vis these terrorists and save Iraq from plunging in a dilemma that promises its demise.
The European Iraqi Freedom Association (EIFA) calls on the European Union, the United States, the United Nations and the countries in the region, to designate the militias affiliated with Iran, especially the Badr, AAH and Kata’ib Hezbollah along with their commanders, on their terrorist lists and it further urges the Government of Iraq to disarm them and bring their commanders to face justice.
Struan Stevenson
Struan Stevenson is President of the European Iraqi Freedom Association (EIFA) He was a UK Conservative Member of the European Parliament from 1999 to 2014 and was President of the European Parliament’s Delegation for Relations with Iraq from 2009-2014.

Previous article
IRAN: Political prisoner hanged on verge of Rouhani’s visit to Europe
Next article
Rouhani will face protests in Europe and for good reason