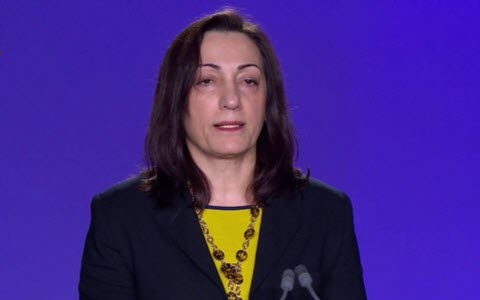 NCRI – Mrs. Zinat Mir Hashemi, Editor in Chief of the “Nabard-e Khalq” outlet and a member of the Organization of Iranian People’s Fedai Guerrillas Central Committee, wrote an article explaining how ISIS rushed to the support of Iranian regime’s  Supreme Leader Ali Khamenei.

“This terrorist attack provided considerable support for the terrorist regime of Iran, especially Iranian Supreme Leader Ali Khamenei. He is capitalizing on it and by increasing crackdown, quelling and spreading terrorism he is depicting himself as a victim. As the anti-dictatorship movement in Syria advanced, ISIS rushed to the support of Bashar Assad. Now, ISIS is rushing to the support of the caliphate in Tehran. Following the farce presidential election, during which the entire Iranian regime establishment and Khamenei himself were forced to accept a major defeat, Khamenei referred to the 1980s executions at Khomeini’s tomb to provide spirit for his low morale troops. Moreover, a movement of plundered investors in cities across Iran is gaining momentum. Thus, ISIS’ terrorist attack in Tehran provide significant support for Khamenei.

At a time when Iran’s government sponsored terrorism is causing further catastrophes each day in Syria, Iraq, Yemen and other corners of the globe; at a time when the Qatar crisis with a number of Arabic is weighing on the shoulders of the Islamic Republic; and at a time when Iran’s missile dossier is causing the formation of a regional front against Khamenei’s policy of exporting terrorism, ISIS’ terrorist attack in Tehran will provide an opportunity for Khamenei for a short period to describe the bloody attack as “playing with firecrackers,” and also crackdown on all movements, including the justice movement, the workers’ movement and those whose investments were plundered. Iran’s agents are resorting to conflicting remarks. They are depicting themselves as the victims of terrorism, and Khamenei seeks to downgrade any importance in this attack.

The mullahs’ regime is engulfed in deep crises and Khamenei is facing a very weak and fragile status. ISIS’ support will be very short-lived.

Previous articleAt Least 30  Prisoners on the Verge of Execution in Southeast Iran
Next articleIran: 20 Individuals to Be Lashed For “Eating During Fasting Hours”

While Iranian people are struggling with rampant poverty, and over 200,000 citizens have perished due to the regime’s inhumane coronavirus policy, Revolutionary Guards (IRGC)...
Read more