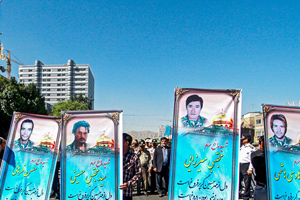 The bodies of at least five men who had been fighting for Syrian dictator Bashar al-Assad were buried in the city of Mashhad, northeast Iran, on Thursday.

Reporting on the burial held for the five killed in Syria, Iranian state media said that at least 400 men who have died fighting for al-Assad have been buried in Iran so far, of which 79 cases have taken place in Khorasan Razavi province.

Many of those killed are Afghan citizens that are being referred to as the ‘Fatemioun.’

The Iranian regime has been sending illegal Afghan immigrants to Syria to serve as frontline fighters alongside the Syrian dictator’s struggling troops.

The Afghans who live as illegal immigrants in Iran often are rounded up by the regime’s Revolutionary Guards.

They are given the choice of either fighting in Syria or going to jail in Iran.

The German magazine Der Spiegel in May estimated that at least 700 Afghans have now been killed in fighting around Aleppo and Damascus alone.

This reliance upon Afghan fighters is part of the Iranian regime’s strategy of support for the al-Assad regime, its key regional ally, which is coming under increasing pressure from Syria’s democratic opposition fighters.

An Afghan news website has published a report on how the Iranian regime recruits Afghan immigrants:

Morad Ali, an Afghan refugee in Iran, was sentenced to six years in connection with smuggling drugs. Several months later Ali met some recruiters inside the prison and got an offer of freedom on the condition that he joined the Iranian regime’s Revolutionary Guards (IRGC).

The offer included monthly payments of $600 and official papers to live in Iran as a permanent resident. All would be given if Ali agreed to travel to Syria and fight in favor of the al-Assad regime.

To escape brutal prison life, Morad Ali took up the offer and agreed to join the training camp where he met dozens of other former Afghan prisoners preparing to become ‘heroes’ in the front-line. About a week later Ali and a group of other young Afghans, were deployed in a lonely tall building in Syria. Morad Ali was later captured by Syria’s moderate opposition.
Of the hundreds of Afghan prisoners and illegal immigrants that the Iranian regime has recruited to fight in Syria, few have returned to Iran, and rumor has begun spreading within Afghan communities in Iran that the ”freedom offer” is a trap. The real choice is either to be killed or captured.