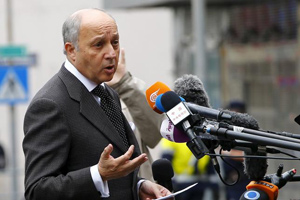 An accord to curb the Iranian regime’s nuclear program remains elusive due to disagreements on fundamental issues, France’s foreign minister Laurent Fabius said on Saturday in Vienna, just days before the June 30 deadline for a deal.

“What we want is a robust deal that recognizes Iran’s right to civil nuclear power, but guarantees that Iran gives up definitively the nuclear weapon,” Fabius told reporters upon arrival in the Austrian capital.

For this there are three “indispensable” conditions, he said: A lasting limitation of the Iranian regime’s Research and Development capacity, rigorous inspections of sites, including military if needed, and the automatic return of sanctions if the regime violates its commitments.

“These three conditions respect Iran’s sovereignty. They have still not been accepted by everybody, yet they form the key base of the triangle that forms the robust agreement that we want,” he said.

The self-imposed deadline for a deal under which the Iranian regime would cut back its nuclear program in exchange for relief from economic sanctions expires on Tuesday.

The real deadline is not June 30 but July 9, diplomats say.

The US delegation must present the deal to Congress by July 9 if a mandatory congressional review period before President Barack Obama can begin suspending sanctions is to be limited to 30 days. After July 9, the review will last 60 days, according to a law passed recently by US legislators.

Negotiators involved in the talks fear that such a lengthy delay, which would also hold up the cancellation of United Nations nuclear-related sanctions by the UN Security Council, would be too long and would create the opportunity for any deal agreed in Vienna to unravel.

The National Council of Resistance of Iran (NCRI) unveiled on Thursday a major report on the Iranian regime’s deceit tactics and strategies in nuclear negotiations with the world powers.

The report, unveiled by the NCRI’s US Representative Office in Washington, reviewed 12 years of negotiations between Tehran and the EU3 and P5+1. The report’s key finding was that the mullahs’ Supreme Leader Ali Khamenei has insisted on three red lines in the negotiations: barring inspectors from access to Iranian military sites and nuclear scientists and forbidding a halt to nuclear Research and Development (R&D).

Previous articleOver 400 killed in Syria fighting for Assad have been buried in Iran
Next articleGen. Chuck Wald: Iran should not have nuclear weapons