Gen. Chuck Wald: Iran should not have nuclear weapons 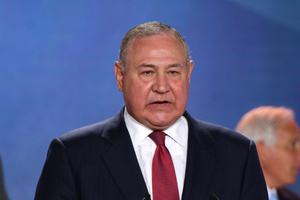 West needs to tell Iran that will not have a nuclear weapon and there isn’t other option, former Deputy Commander U.S. European Command has said.

Rt. General Chuck Wald told a major gathering of Iranians supporting regime change in their country: “we need to tell Iran you will not have a nuclear weapon. Period. There isn’t any alternative, there isn’t any other option.”

General Chuck Wald reiterated US pledge to safeguard the residents of Camp Liberty, as the US government has signed an agreement with each and every individual who once lived in Camp Ashraf and now are living in Camp Liberty.

He told the gathering of Iranians on June 13: “I want to commend Madame Maryam Rajavi for her leadership. She is demonstrating what I consider some of the top leadership in the world which we are very void of, and you have a great leader.”

“I commend all of you for your courage to stand up for freedom in your country.”

“We need to start protecting our friends in Camp Liberty and live up to our promises as a nation. It’s embarrassing that we are not doing that,” he said.