The International Committee in Search of Justice (ISJ), which enjoys the support of over 4000 parliamentarians on both sides of the Atlantic, in a letter to Simonetta Sommaruga, President of the Swiss Confederation, while condemning the recent decision by Switzerland to close the assassination case of Professor Kazem Rajavi, demanded that “the assassins of Professor Kazem Rajavi must be put on trial in Switzerland without leniency.

The full text of this document is below:

We were shocked to learn that the Prosecutor’s Office of the county of VAUD in Switzerland has decided to close the file related to the assasination of Professor Kazem Rajavi soon. Terrorists dispatched by Tehran assassinated Professor Rajavi, brother of Massoud Rajavi, the Leader of the Iranian Resistance and the Representative of the National Council of Resistance of Iran (NCRI) in Switzerland as well as its representative in the European Headquarters of the United Nations in Geneva. He was assassinated in the suburbs of Geneva on April 24, 1990. Prof. Rajavi was one of the most prominent human rights advocates. The decision to close the file is an insult to justice and a violation of democratic and human rights values, prompted by political expediency that encourages the religious fascism ruling Iran to carry out further assassinations with impunity.

On March 20, 2006, the investigative Judge in the county of VAUD, ordered the arrest of the then-Iranian Minister of Intelligence, Ali Fallahian, for his complicity in the assassination. According to documents and reports from the NCRI, in addition to Fallahian, Ali Khamenei, the Iranian regime’s Supreme Leader, then-Foreign Minister Ali Akbar Velayati, and Hassan Rouhani, at the time Khamenei’s representative on the regime’s Supreme National Security Council and the council’s secretary, were involved in this assassination and those of many dissidents abroad. Courts in Germany and Argentina have issued international arrest warrants for a number of of them.

The arrest warrant of Ali Fallahian reads, “The execution of Kazem Rajavi was carefully planned. Commando teams once came to Switzerland in October 1989, then in late January and early February 1990, and finally from April 10 to 24, 1990 …. Investigations revealed that 13 people were involved in the preparation and execution of the murder. The thirteen had Iranian service passports with ‘on mission’ mark engraved on them. Some of these documents were issued simultaneously in Tehran on the same day …. All Iranian service passports were issued only by order of the ministry under the leadership of Ali Fallahian, and were confiscated at the same airport when the perpetrators returned to Iran. All of the service passports of 13 people whose names were mentioned above were issued in Karim Khan, a street in Tehran. Two buildings on this street are the headquarters of a section of Iran’s intelligence service, Vavak.”

Terrorism and crimes against humanity are not subject to the statute of limitations, particularly in the case of a regime in which one ambassador and six diplomats have been expelled for participating in

assassination attempts against dissidents in the past two years alone, and another diplomat has been in jail in Belgium for nearly two years for his criminal plot to bomb a large gathering of Iranians in Paris on June 30, 2018.

Economic deals and political considerations never justify concessions to terrorism. We therefore call on the President of the Swiss Confederation, the Foreign and Justice ministers as well as the Attorney General and the prosecutor of the county of Vaud and other Swiss officials to issue international arrest warrants for those who are known to have ordered and committed this crime, and, if necessary, to put them on trial in absentia so that justice is done.

We call on all human rights advocates, parliamentarians, and civil society in Switzerland to call on the authorities to continue to pursue justice in this file.

The prosecution of criminals is the best way to deal with terrorism; closing this file facilitates and promotes more terrorism.

STRUAN STEVENSON Chair ISJ Committee on the Protection of Political Freedoms in Iran President of the European Parliament’s Delegation for Relations with Iraq (2009-14) and chairman of Friends of a Free Iran Intergroup (2004-14). 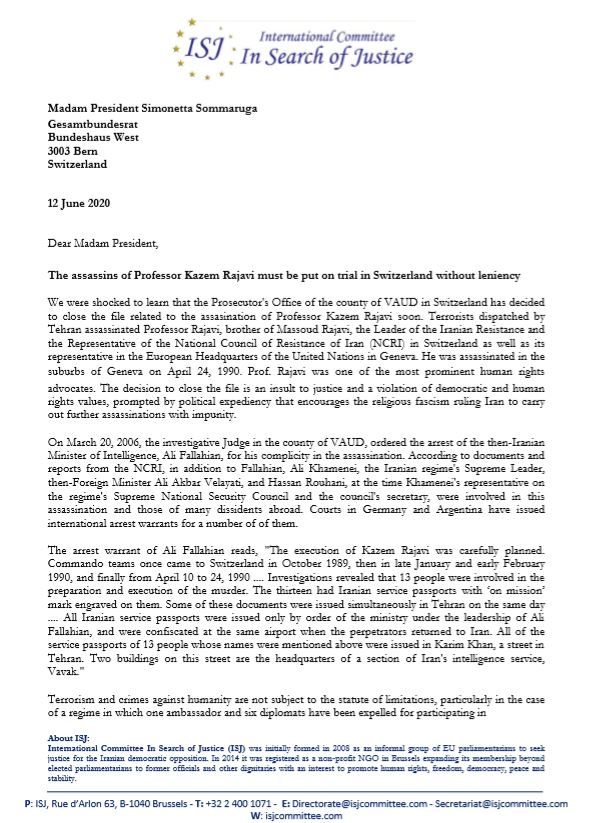 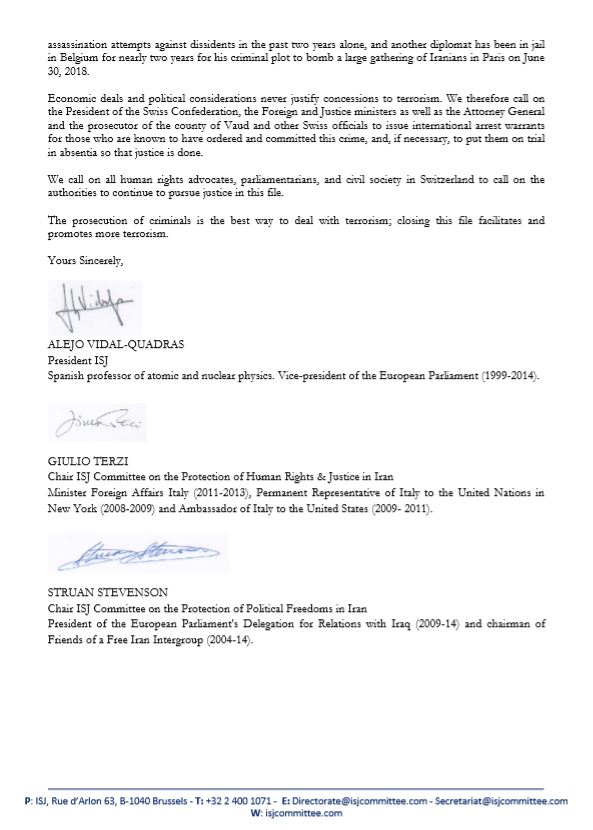