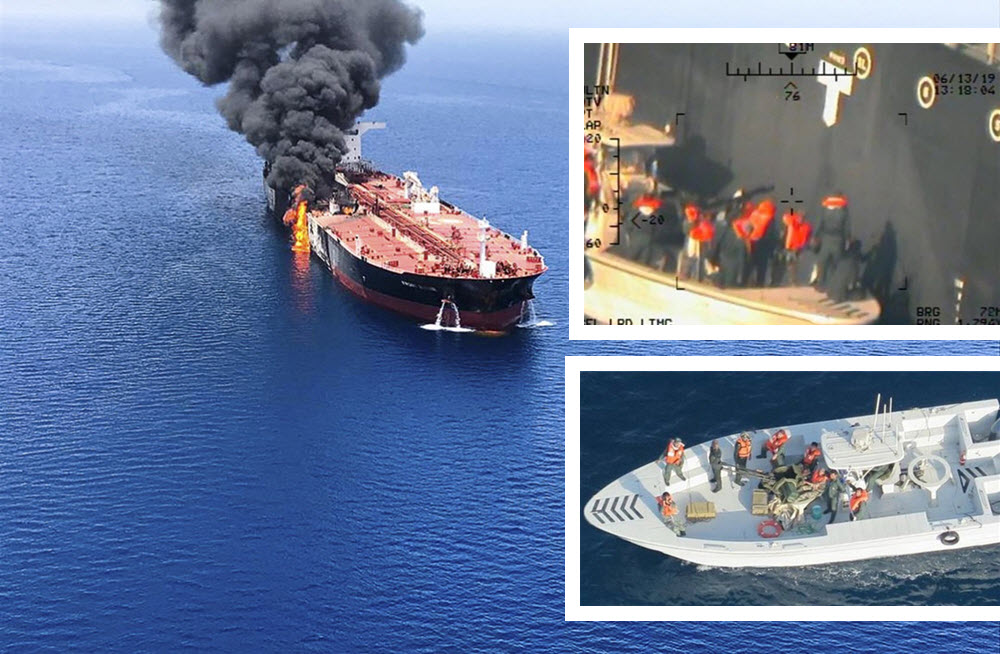 U.S. acting defense secretary Patrick Shanahan said the photos ‘validate the reliable, credible intelligence we have received on hostile behavior by Iranian forces and their proxy groups that threaten United States personnel and interests across the region.’

He said: ‘the United States does not seek conflict with Iran’ but added that the U.S. would deploy 1,000 more troops to the Middle East for ‘defensive purposes’ and to ‘protect our national interests.’

The U.S. military says the photos, taken from a Navy helicopter, show Iranian forces removing an unexploded mine from the side of the Japanese-owned Kokuka Courageous oil tanker in the Gulf of Oman last Thursday.

Other photos show a large hole on the side of the Courageous, above the water line, that officials say appears to have been caused by another mine, on the other side of the tanker.

‘Iran is responsible for the attack based on video evidence and the resources and proficiency needed to quickly remove the unexploded limpet mine,’ U.S. Central Command said in a statement accompanying the new pictures.

The Pentagon released the photos Monday to bolster its claim that Iran was responsible for the attacks on the Courageous and the Front Altair.

The pictures are far higher quality than those released last week which were grainy black and white images.

The military say that the new images it unveiled show the Iranian regime put limpet sides above the water line on each side of the vessel and returned to remove the unexploded device when it failed to go off. They left behind parts of the device and a handprint, Central Command stated.

Bloomberg News reported that the Pentagon also revealed what it says is a new timeline of the attacks, saying that U.S. forces were first alerted to the attacks by the Front Altair tanker at 7.12 a.m. local time.

That was followed by an explosion reported at 8 a.m. on the Courageous – although its crew said that there was an external projectile, not a mine.

And four hours afterwards, the military says that an Iranian fast patrol boat of the Gashti class was seen alongside the Courageous removing what it says is a limpet mine from the vessel.