Presence of Qassem Soleimani in Aleppo, Proof of Killings of Syrian Citizens (by Iran Regime) 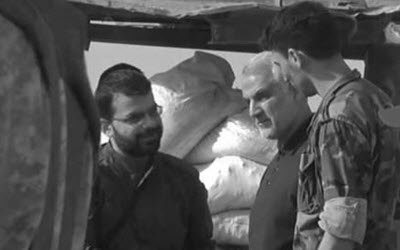 NCRI – One of the documents exposing Iranian regime’s criminal meddling in Syria is the presence of Qassem Soleimani, commander of Iranian Revolutionary Guards (IRGC’s) terrorist Quds Force, in Aleppo, a city that is now facing brutal massacre of its citizens by IRGC and Assad regime.

A report by Al Arabiya Television:

Iran regime’s affiliated Iraqi militants who are mainly form a group known as “Asaeb” have distributed videos that show Qassem Soleimani, commander of Quds Force, is present in the war fronts in Syria. A video shows that Soleimani is visiting Iranian regime’s affiliated military units that are engaged in the battles in Aleppo.

The video is published two weeks after start of extensive military operations by Assad forces and their allies to gain complete control of Aleppo and the combatants’ resistance against them. The exact date of this video is not clear but Iraqi militants only explained that the commander of terrorist Quds Force is in Aleppo.

Earlier, the (Iraqi) militants acknowledged that the regime in Iran has dispatched a large number of militants from Iraq to Syria.

Iraqi militants say that after the fighting in Mosul (ends) they get ready to go to Syria to fight in defense of the Assad regime.