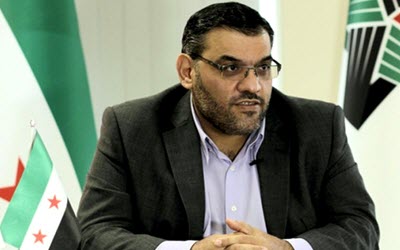 NCRI – In a press conference in Istanbul on November 17, the Secretary General of The Syrian National Coalition Anas Al-Abdah said that “there’s no other option in front of the (Syrian) revolution but to continue its fight in all fronts. All the besieged areas in Aleppo are bombarded without any international condemnation. Despite the UN ceasefire, the Al-Va’ar district in Aleppo is still subjected to Russian bombings.”

He added: “25 villages have been liberated from ISIS following the operation Euphrates Shield.”

Anas Al-Abdah stressed that “we demand that Hezbollah’s parade in Alghasir be condemned by the Arab Union and the UN as a clear intervention.”
The Secretary General of the Syrian National Coalition said that “the negotiations are currently suspended until further notice. Russia, the Iranian regime and the Assad’s regime have destroyed the negotiations and seek a military solution. A political solution has been suspended until further notice. We as the Syrian opposition and revolutionaries, however, are seeking a political solution.”

Anas Al-Abdah stressed that “we have four demands from the new US government: to declare the Bashar Assad’s regime illegal, to take a stance in line with the stances of Friends of Syria Group, prevent the Syrian regime’s fighter jets from flying over the liberated lands and to put on the terrorist list the militia groups coming to Syria from Iran and Afghanistan.”