Iran: Appalling Rate of Poverty and Fatality Among Construction Workers 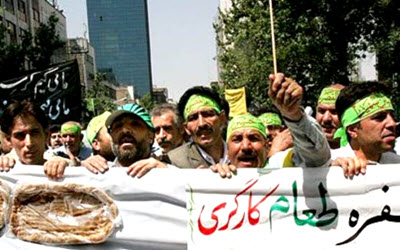 NCRI – Iran’s chief of the ‘Construction Workers Association’ said: “According to experts the monthly income of less than $580, is considered below the poverty line and while the construction workers monthly salary is $230, this figure is not the poverty line anymore, this is the misery line!”

At a press conference on the anniversary of the adoption of labor law, Akbar Shokat, Iran’s chief of construction workers association stated: “today more than 95 percent of workers have temporary employment contracts.” The state run Tasnim news agency reported on November 20.

He stated, every day 5workers lose their lives as a result of work accidents, in which 3out of them are construction workers and 2 are industrial workers.

He also admitted, in Iran 25 to 30 workers lose their lives due to job diseases on daily basis, and on average and in the same category of jobs, 5 – 7 years after retirement, workers die as a result of job related diseases in which 33% of fatality is caused by lung cancers.