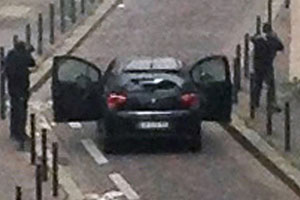 NCRI – A document discovered by the French police on the computer of Cherif Kouachi, the man responsible for the January 7 killings in Paris, shows that he had called the decree by Khomeini (founder of the clerical regime in Iran) to kill a British novelist as fully justified.

The New York Times of January 17 explained that the evidence that the French police had discovered on the computer of Cherif Kouachi in 2010 included a document in which he describes the fatwa against novelist Salman Rushdie as being “fully justified”.

The document is clear evidence that proves the reality that the roots of the Charlie Hebdo massacre are founded in Khomeini’s fatwa of 1989 for the execution of British author Salman Rushdie. In those years, Rushdie, the author of “The Satanic Verses” had been charged with insulting Islam.

That year, Khomeini was looking for a way to make up for his defeat in the 8-year war with Iraq. Similarly, he was looking for some issue to overshadow the massacre of 30,000 political prisoners in the span of just a few weeks throughout Iran.

On 14 February 1989, Khomeini issued the following fatwa: “Courageous Muslims throughout the world” anywhere you find “the author of The Satanic Verses” and “the publishers who knew its content”, “quickly execute them”.

The fatwa reads: “Anyone who has access to the author of the book, but is unable to execute him should introduce him to the people so that he meets his punishment.” Subsequently, following the decree, Mir Hossein Mousavi, the then Prime Minister, announced public mourning in Iran.

Following this fatwa, in 1991, a fundamentalist terrorist stabbed Hitoshi Igarashi, the Japanese translator of Salman Rushdie’s book, to death. Likewise, in 1993, the Norwegian publisher of this book, William Nygaard, was attacked and injured. In similar attacks, the Italian and Belgian translators of this book were also severely injured. Salman Rushdie is living in hiding and has changed his place of residence 30 times.

The Iranian regime has declared – time and again – that this fatwa still holds and in autumn of 1991, a state foundation called “15 Khordad” placed a bounty of $3.3 million on the head of Salman Rushdie.
In a message on 29 January 2005, the regime’s present supreme leader, Ali Khamenei, reiterated the death verdict for the British author.

From the standpoint of many Islamic scholars, this fatwa is not justified. However, Khomeini and the mullahs who succeeded him have placed death warrants for many authors and artists. Fereydoun Farokhzad, the Iranian showman, was assassinated on 7 August 1992 by elements of the mullahs in Bonn, Germany.

Similarly, in the 1990s inside Iran, many authors, intellectuals and artists were assassinated because of fatwas issued by state mullahs, including: Mohammad Mokhtari, Mohammad Jafar Pouyandeh, Majid Sharif, Pirouz Davani and at least 100 other intellectuals – killed in what was called “serial assassinations” in Iran.