Syrian Opposition: We Reject Any Agreement With an Iran Regime Role in It 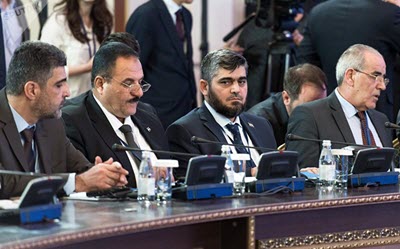 NCRI – The Syrian opposition declared on Thursday May 5 its rejection of any deal in which the Iranian regime has a role or is considered as a guarantor state.

“The Iranian regime is the killer of Syrian people”, said Osama Abu Zaid, spokesman for the Syrian opposition delegation in talks held in Kazakh capital Astana to settle the Syrian conflicts.

The opposition also said it rejects any agreement which is not based on international resolutions.

“We oppose the division of Syria and are not an active party to the agreement signed”, said Abu Zaid in a press conference in Astana, calling for a timetable for departure of foreign militias from Syria.

The Syrian opposition spokesman said “we were shocked by the (Russian) escalation of military operations and bombing of liberated (from Assad’s control) areas.”

“Before we attended the negotiations, we were promised that the bombing of liberated areas would be stopped”, asserted Abu Zaid, adding “our decision to attend the Astana talks was aimed at putting an end to shedding of the Syrian blood.”

Abu Zaid emphasized that it’s necessary for the international community to take practical measures to stop Iranian regime’s influence and ambitions in Syria. He refused to respond to a question by Syrian state TV on fight with against Al-Nusra Front, but another member of the opposition delegation responded the question, saying “we fight against anyone who kills the Syrians.”

The next round of Astana talks is due to be held in mid-July.

Previous articleOnline Conference: Iran’s Presidential “Election”, Is a Choice Between the Worse and Worse Than the Worse for the Regime
Next articleIran: Political Prisoner in Dire Conditions