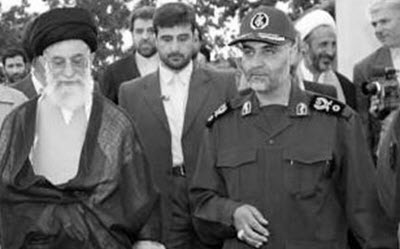 Why Iran’s Revolutionary Guards deserve to be blacklisted

The discussion in the White House to designate Iran’s Revolutionary Guards (IRGC) as a foreign terrorist organization remains very much alive.

The US Congress has also witnessed many different plans weighed in this regard. Iran and its lobbies, on the other hand, terrified of the consequences, have taken to the media to depict an image of the US suffering from such a move. Wrote Heshmat Alavi on ‘Al-Arabiya’ on February 28, 2017

The political, economic, social and military consequences of the IRGC’s terrorist designation are quite significant, to say the least. There are two paths to realize such an objective. President Donald Trump can issue an executive order, which can be cancelled through an executive order.

Congress can also pass a bill to engrave such a decision law of the land in America.

With a new administration in Washington, both paths are quite active and probable, especially through Congress that is already evaluating a variety of bills in this regard.

If the IRGC is blacklisted, this very important entity for the Iranian regime will be placed under the following restrictions according to US laws:

– All IRGC assets in the US will be subject to confiscation

– No US citizen of company, or sister company, are authorized to engage in goods or service transactions with the IRGC

– US banks are banned from financial transactions with the IRGC

The IRGC is considered the main pillar of the mullahs’ regime, in charge of pursuing Tehran’s policy of domestic crackdown and exporting terrorism abroad. Blacklisting the IRGC would inflict a major blow to the Iranian regime in its entirety. This will weaken not only Iranian Supreme Leader Ali Khamenei but the regime as a whole, as the IRGC is the force ensuring the security of mullahs’ apparatus in its entirety.

The IRGC is a large economic powerhouse. There are no exact statistics of the budget or revenue the IRGC enjoys through its economic activities. There is no doubt, however, that the IRGC, along with its long slate of entities and affiliated organizations, has an in-depth presence in all aspects of Iran’s life. This includes the oil and gas industry, communications, major construction projects, transportation, power projects and imports.

Experts estimate the IRGC is in control of around 20 to 40 percent of Iran’s economy. The IRGC runs 812 companies registered inside the country and abroad, all literally under the sultanate of this military empire. Any foreign individual or company intending to invest in Iran must enter cooperation with at least one of the 812 above mentioned companies.

Currently, the IRGC is involved in 1,700 government contracts, while there are claims of the number ranging at around 2,000. These contracts have transformed the IRGC into the largest economic force not only in Iran, but across the Middle East. Some of these contracts are valued into the billions. Reuters reported the IRGC empire has an annual sale of $10 to $12 billion.

In the scenario of an IRGC blacklisting, new sanctions will most definitely be a high probability. In such a case, there will be grave negative impacts to come for Tehran.

1. Foreign investors will literally flee from Iran. Projects in need of investment in Iran’s oil and gas sector will be either difficult or quite impossible. All companies that signed contracts following the deal aimed at curbing Iran’s nuclear program will have to reevaluate their future interests. One such example was France’s oil giant Total announcing final decisions on any deals with Iran will wait until the summer to allow the new US President clarify his position on the Iran nuclear deal. This has endangered Total’s contract with Iran on developing phase 11 of the mammoth South Pars gas field.

2. Iran’s return to global banking and financial system will become very difficult. The banks of various countries will hesitate to sign deals with Iran considering probable US sanctions and other punitive measures.

3. Export of goods to Iran will turn out extremely problematic, considering the IRGC’s deep involvement in numerous aspects of the country’s economics.

While Iran boasts deals with Airbus and Boeing to supposedly inject new life into to its economy, the new White House has raised concerns amongst foreign companies.

“Air India Express… has put on hold a plan to fly to Tehran amid renewed tensions between the US and Iran…Since some of Air India Ltd.’s plane purchases were funded by the Export-Import Bank of the United States, it won’t be able to fly to places where the US government imposes sanctions, K. Shyamsundar,” according to Bloomberg citing the airline’s chief executive officer.

This may be considered the most important aspect for Iran. Why?

However, blacklisting the IRGC will lead to the following, to say the least:

1. Iran’s presence in Syria, Iraq, Yemen and other countries will become illegitimate and provide legitimacy for the international community to evict the IRGC from all foreign countries.

2.The IRGC and its affiliated proxy militia must pull out of Syria, Iraq, and … or face the consequences of such a blacklisting.

3. Pressure on the IRGC in Syria will define into Bashar Assad and the Lebanese Hezbollah losing their support in Syria and Lebanon. The Houthis in Yemen and the Popular Mobilization Units in Iraq will face similar fates.

4. This will spell an end to the IRGC’s adventures in international waters, as its boats and ships can be confiscated and even attacked.

The main benefactor in such a scenario are Middle East nations who have suffered from IRGC-sponsored terrorism and their Quds Force elements for decades. This includes Syria, Iraq, Bahrain, Yemen, Kuwait and Saudi Arabia.

In this Sept. 21, 2016 file photo, an Emad long-range ballistic surface-to-surface missile is displayed by the IRGC during a military parade, in front of the shrine of Ayatollah Khomeini, just outside Tehran. (AP)

The IRGC has been the main element behind oppressing social rallies and protests. The 2009 uprising was quelled only after the IRGC was dispatched into the city streets. A terrorist designation for the IRGC will inflict a severe blow to its members’ spirits in the face of popular demonstrations.

It is also an undeniable reality that a blacklisted IRGC will suffer major crises, a decrease in ranks and files, and lead to a loss of spirit. The defensive lines established in Damascus, Baghdad, Beirut and Sana’a must be transferred back to cities inside the country.

The Iranian people will most likely react to such a defeat for the IRGC and regain their readiness to pour into the streets whenever possible. The Iranian regime has enjoyed foreign support and the West’s highly flawed appeasement policy, allowing it rule with an iron fist and through atrocious human rights violations.

The IRGC’s terrorist designation will be considered the last nail in the coffin for the appeasement policy and foreign support.

The IRGC and affiliated militias playing any positive role in the fight against ISIS is nothing but a hoax and major deception. There is no doubt that ISIS is the offspring of the atrocious oppression of the nations of Iraq and Syria by the mullahs’ regime with the support of Bashar Assad and former Iraqi Prime Minister Nouri Maliki.

In an interview with Fox News in November 2014 then US Secretary of State John Kerry revealed how Assad facilitated the release of 1,500 prisoners, parallel to 1,000 by Maliki in Iraq, leading to the foundation of ISIS.

The positions and policies adopted by Maliki against Iraq’s Sunni community paved the path for the rise and growth of ISIS, according to former US ambassador to Iraq James Jeffrey. The Americans knew what Maliki was up to yet chose to take no action, Jeffrey added.

The Iraqi Parliament Research Committee specifically found Maliki responsible for ordering the evacuation of Mosul and leaving the city to ISIS.

Assad repeated a similar tactic in Syria, with the city of Palmyra being one very specific example. It seems as if everyone knows their role in exchanging Syria’s cities with each other. This leaves the West terrified and allows ISIS to launch attacks against Syrian opposition forces.

Iran has never sought the destruction of ISIS, as such an element provides the necessary pretext to continue its meddling and military presence in both Iraq and Syria.

One very interesting argument repeated by many government officials, senators and political/military experts, and repeated by many Arab leaders, is the indisputable fact that Daesh has launched terrorist attacks and killings in all countries, with the exception of Iran. This speaks of a specific cooperation, collaboration and/or unwritten agreement, to say the least.

The IRGC blacklisting is a long overdue measure and Iran has been able to effectively take advantage of such a devastating hesitation seen in the West. The time has come to bring an end to such a drastic mistake and deliver the one message Iran will most definitely take very seriously, and truly crippling the mullahs in favor of the Iranian people’s ultimate interests.

To this end, the only party suffering from an IRGC terrorist designation will be the mullahs in Tehran.