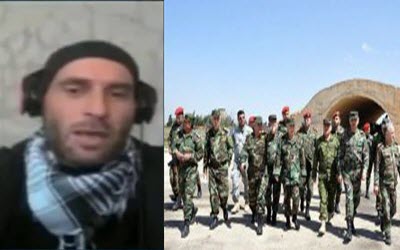 NCRI – Following the US missile attack on the air base of the Assad regime, the media affiliated with the Arabs and the Syrian Opposition released details about the presence of Iranian regime’s forces in the military bases of the Assad regime including Shayrat air base which was targeted by the US earlier.

The head of Qasion News in Homs (a city in Syria), Bassel Ezzeddin, in an interview with Simay Azadi on April 8th stated that Shayrat airport is run by the IRGC forces. He also stated:”this airport (Shayrat) is located in the east vicinity of Homs and had been attacked by the US missiles. It is also significant strategically for the Assad regime. Additionally, the Commanders of the Iran regime are present in this air base.”

Bassel Ezzeddin added:” The IRGC forces have arbitrarily ordered the commanders of Assad in the airport. al-Shayrat is directed by the Iran regime and the measures are implemented in the hotel of the airport. This airport is among the most significant educational bases in which most of the military operations had been carried out.

20 days ago, a military delegation affiliated with the Air Force of the IRGC paid a visit to Shayrat airport. This delegation consisted of 15 officers, pilots, and technical experts of the Iran regime. It is noteworthy that among those (officers) the senior commanders were present as well. This delegation actually intended to support Assad’s air force.”

Bassel Ezzeddin stated that the IRGC supplies Assad’s air force with different sorts of bombs developed by Iran. On top of that, the IRGC forces are also present in most airports of Syria and they are commanded by Qasem Soleimani.

Earlier than that, the Italian news agency, AG reported that the Iran regime has selected Shayrat airport as its military base in order to run operations in Syria and Iraq.

The military analyst, Gen. Ahmed Rahal in an interview with al-Arabiya TV said that the IRGC were often present in this air base and according to the information, they have achieved the complete dominance.