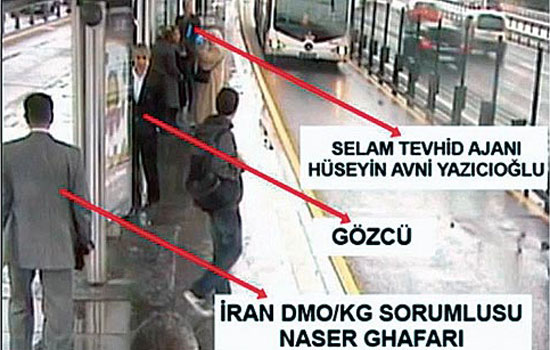 Yılmazer, who has specialized in fundamentalist and extremist religious terror groups, said it was very difficult to expose this clandestine terror network that has access to top officials in Turkey, yet the police have done a solid and careful investigation to expose the wider network of Iranian agents that has been set up in Turkey and discovered connections to senior government officials.

The veteran intelligence expert underlined that Tawhid-Salam is a very important terrorist organization that is backed by Iran.

He also lashed out at Justice Minister Bekir Bozdağ, who ridiculed the investigation, saying: “A group of people say hello with ‘Salam alaikum’ [Peace be upon you] and others reciprocate with ‘Alaikum salam’ [Also upon you]. On some people’s say-so, a terrorist organization was supposedly founded, which is called Tawhid Salam. It is ridiculous.” Turkish Prime Minister Recep Tayyip Erdoğan also adopted a cynical stance about the existence of the terrorist group, raising questions of a cover-up in the government just as Erdoğan tried to do for the corruption scandal that was exposed on Dec. 17.

Former intelligence chief said this is a terrorist organization that was responsible for the assassination of several journalists and academics in the 1990s, including Uğur Mumcu, Bahriye Üçok, Ahmet Taner Kışlalı and several other intellectuals. The organization is also noted for killing US, Saudi Arabian and Israeli diplomats, as well as Iranian dissidents who took refuge in Turkey.

He said the organization stayed dormant for a while until it was reactivated several years ago and started committing bombing attacks and surveillance activities on sensitive targets in İstanbul. Yılmazer said the investigation cannot be hushed up despite government efforts to keep the investigation from going to court.

Information recently released online related to the terrorist activities of the Tawhid-Salam (also known as Jerusalem Army), which was first identified in 1996, has revealed that pro-government dailies Star and Yeni Şafak sought to discredit a secret probe of the group that would implicate senior government officials working on behalf of Iran by claiming that up to 7,000 people with no connection to one another were wiretapped in an investigation of what was supposedly a fake terrorist organization.

However, Yılmazer said only 234 people were wiretapped in three years during the investigation and the original tip about the reactivated Iranian-linked cells was made on Aug. 8, 2010, when an individual came forward in Bursa city.

Some of the details of the investigation have recently come out when Twitter user @ACEMUSAKLARI started uploading documents, photographs and video footage from what seems to be from the original investigation file onto online portals.

According to video footage posted on YouTube, Kamile Yazıcıoğlu, a 49-year-old woman who had fled from her abusive husband, Hüseyin Avni Yazıcıoğlu, reported anti-terror units to the Bursa police, saying that her husband had been working for Iranian intelligence and provided documents as evidence to back up her claims. She later repeated her testimony to İstanbul anti-terror units in depositions given in March and April 2011. The allegations triggered a secret three-year investigation into Yazıcıoğlu and his accomplices and contacts, both among Turkish officials and Iranian intelligence agents. Prosecutors in İstanbul launched an investigation on April 8, 2011, case file 2011/762.