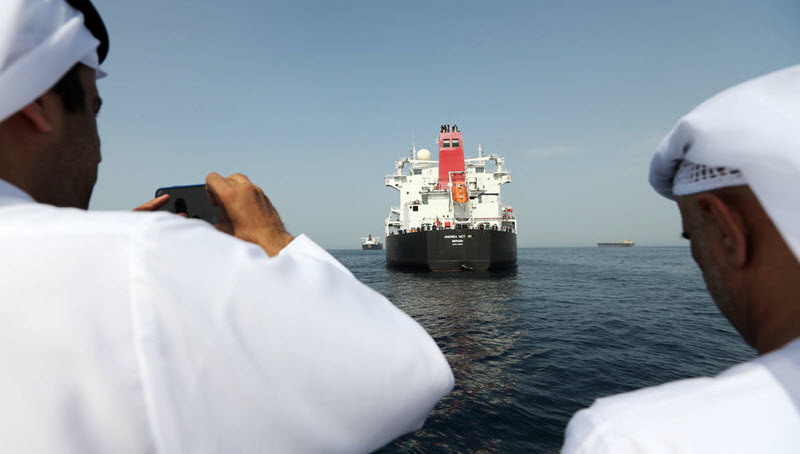 The Iranian regime is a leading candidate for having carried out attacks on four tankers near the United Arab Emirates, a United States official familiar with American intelligence said on Monday.

“This is what Iran does … The sort of thing you could see Iran doing … It fits their M.O. (modus operandi),” the official told Reuters on condition of anonymity, saying the most obvious explanation for the Iranian regime’s statements distancing itself from the incident was that Tehran was “trying to muddy the waters.”

An American military team’s initial assessment is that Iranian or Iranian-backed proxies used explosives Sunday to blow large holes in the four ships, a U.S. official told the Associated Press on Monday.

The official told the AP each ship has a five to ten-foot hole in it, near or just below the water line, and the team’s early belief is that the holes were caused by explosive charges. The team of U.S. military experts was sent to investigate the damages at the request of the UAE.

The official was not authorized to discuss the investigation publicly and spoke to the AP on condition of anonymity.

Gulf officials have characterized the damage to the tankers as sabotage. Two Saudi oil tankers, a Norwegian-flagged vessel, and a bunkering tanker flagged in Sharjah, one of the UAE’s seven emirates, all suffered similar damage Sunday.

The U.S. has warned ships that “Iran or its proxies” could be targeting maritime traffic in the region, and Washington has moved additional ships and aircraft into the region.

The executive director at the UAE’s National Media Council, Jaber Al Lamki, said the incident was ‘an attempt to sabotage not just boats, but one aimed at undermining global oil supplies and maritime security.’

The oil tankers were visible in satellite images provided to the AP by Colorado-based Maxar Technologies. A boom surrounded the Emirati oil tanker A. Michel, indicating the possibility of an oil leak. The other three showed no visible major damage from above.

Intertanko, an association of independent tanker owners and operators, said it had seen images showing that ‘at least two ships have holes in their sides due to the impact of a weapon’.

The MT Andrea Victory, another of the allegedly targeted ships, sustained a hole in its hull just above its waterline from ‘an unknown object,’ its owner said.

Pictures of the Andrea Victory, which the company said was ‘not in any danger of sinking,’ showed damage similar to what the firm described.

The fourth ship was the A. Michel, a bunkering tanker flagged in Sharjah, one of the UAE’s seven emirates.

Meanwhile the general-secretary of the six-nation Gulf Cooperation Council (GCC) described the alleged sabotage as a ‘serious escalation’ in an overnight statement.

‘Such irresponsible acts will increase tension and conflicts in the region and expose its peoples to great danger,’ Abdullatif bin Rashid al-Zayani said.

Bahrain, Egypt and the internationally recognized government of Yemen have also condemned the alleged sabotage.