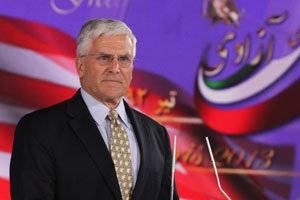 NCRI – The Iranian regime is training terrorists and actively trying to prevent democracy within Iraq, where it is playing a ‘brutal and destructive role within their government, former US army chief General George Casey has declared.

He also accused the Iranian regime of attempting to foster public support within Iraq by providing economic assistance to Iraqis in the southern part of the country.

General Casey served as Chief of Staff of the US Army from 2007 to 2011 and was also the commanding general of the multi-national force in Iraq from 2004 to 2007.

He also used his speech in Paris to praise the role of Iranian Resistance president-elect Maryam Rajavi in succeeding in the removal of the People’s mojahedin Organization of Iran (PMOI/MEK) from the US terrorist list.

General Casey said of the MEK (PMOI): “It’s a tribute to the perseverance and the persistence of this organization, but based on my experience it should have been done a long time ago.”

But he said the residents of Camp Liberty were still at risk after repeated attacks and the United Nations, the US and Iraqi governments must ensure they are protected.

General Casey then said of Iran’s role in destabilising Iraq: “I’ve seen first-hand the brutality and the destructive nature of the Iran’s role inside Iraq. Four things from my time there about the Iranian regime are crystal clear to me.

“First of all, the regime actively used terror to accomplish its political objectives. Secondly, the training and equipping of Iraqi militias was a major factor in sustaining the sectarian violence that racked Iraq in 2006 and 2009.

“Third, this regime is directly responsible for the killing of hundreds of coalition forces and thousands of Iraqis. And lastly, because of those things, they richly deserve their designation as a state sponsor of terror.”

The Iranian regime now wanted the US to fail in creating a stable democracy in Iraq by firstly gaining political influence with financial support to Iraqi political parties and leaders, and economic assistance to Iraqis primarily in the southern part of the country, General Casey said.

He added: “They fostered instability in Iraq through the training and equipping of terrorist organizations. We saw from the beginning that there was a close connection between the Qods force and the Shi’a militia’s.

“But we didn’t really begin to see the full impact of Iran’s influence until after the bombing of the al-Askari Mosque in Samarra in February of 2006.”

He had even seen first hand how militia within Iraq were using Iranian made explosives and witnessed rocket propelled grenades, with writing on them in Farsi.

He added: “By mid-2006, there was no doubt that Iran was providing weapons and equipment to terrorist organizations inside Iraq. I took this information with the U.S. ambassador to the new Prime Minister Maliki.

He had also seen evidence first hand of maps showing how how Iranian-back Qods militia planned to take controls of parts of Baghdad.

He added: “I can tell you that this regime will not stop in its support of terror and they will continue to use terror to accomplish their political objectives and to spread instability across the Middle East.

“When you combine this with their continued pursuit of nuclear weapons, I believe that this regime presents an unacceptable threat both to the region and to the international community.”

And he said of the Iranian Resistance: “I can think of no other case when democratic opposition to an existing regime is more warranted. So I applaud you for your efforts and I wish you every success.”

Previous articleSenior Iranian cleric: Syria and Lebanon is our front line
Next articleIran: Political prisoners are in an undetermined state since February