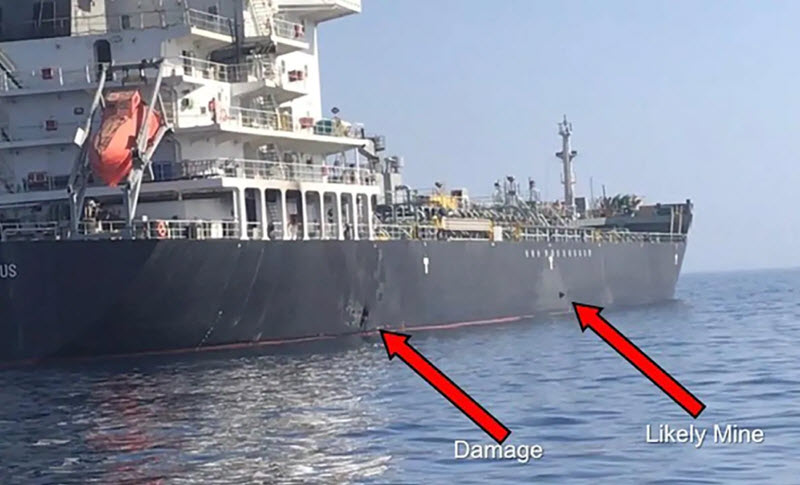 The United States military on Thursday released a video that showing the Iranian regime’s Revolutionary Guards (IRGC) removing an unexploded mine attached to the hull of the Japanese-owned chemical tanker Kokura Courageous, one of two tankers attacked in the Gulf of Oman.

U.S. Central Command spokesman Capt. Bill Urban released a timeline and photographs suggesting that the U.S. military observed Iranian vessels returning to the tanker to retrieve the unexploded mine, The Washington Post reported.

“At 4:10 p.m. local time an IRGC Gashti Class patrol boat approached the M/T Kokuka Courageous and was observed and recorded removing the unexploded limpet mine” from the Courageous, Urban said, according to the Post.

Secretary of State Mike Pompeo on Thursday blamed the Iranian regime for attacking the Kokura Courageous and another ship, Norwegian-owned Front Altair, saying the assessment was based on intelligence.

Later Thursday night, U.S. Central Command released the video, which it says shows Iranian sailors removing a mine from the Kokura Courageous’ hull.

In the video, a smaller boat is shown coming up to the side of the Japanese-owned tanker. An individual stands up on the bow of the boat and can be seen removing an object from the tanker’s hull. The U.S. says that object is likely an unexploded mine.

Earlier in the day, four US officials told CNN the U.S. had the images.

One of the officials said the video came from a US military aircraft that was recording as it flew overhead.

The boat made the move even after the destroyer USS Bainbridge, as well as a U.S. drone and P-8 aircraft, had been on the scene for four hours. U.S. defense officials believe that the Iranians were seeking to recover evidence of their involvement in the attack.