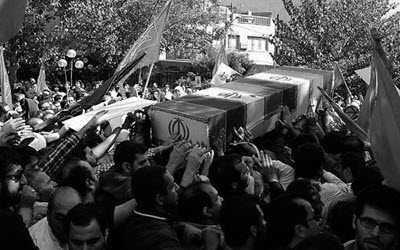 NCRI – In the continuing factional feuds over the stalemate of the Iranian regime policies in the region, Mehdi Khazali, the son of cleric Abolqassem Khazali (one of the former officials of the regime) during a speech published on the Internet and social media, about the role of Iranian Revolutionary Guards (IRGC) commanders and the terrorist Quds Force, said: “All of our policies are at the stake and hostage of Iranian Revolutionary Guards.”

“In Syria, the people revolted and the Arab spring has arrived behind the walls of Bashar al-Assad’s palace, but the Qods Force officials proudly say that Bashar al-Assad had no more than ten thousand troops and we kept him (in power); against whom? The Syrian people! This is wrong; (that’s how) the people of Syria became our enemy,” Khazali said.

“We have the worst situation in Syria and deep hatred is created (against Iranian regime),” he added.

Previously, Khazali had said: “If it wasn’t for the actions of Qassem Soleimani, Daesh (ISIS) would not emerge in Syria… Eight-year war (with Iraq) was not enough, now we have been fighting in Syria for five years.”

Reacting to Khazali’s statements published on the cyberspace and social media, sources and websites affiliated with Khamenei’s faction and IRGC have written: “Mehdi Khazali has a vehement stance against Qassem Soleimani and introduces him as the main culprit for the war in Syria and the rise of Daesh (ISIS). He considers Khomeini and Khamenei and the IRGC responsible for all the problems of the country and the region. It is not surprising to hear such words from such a person!”