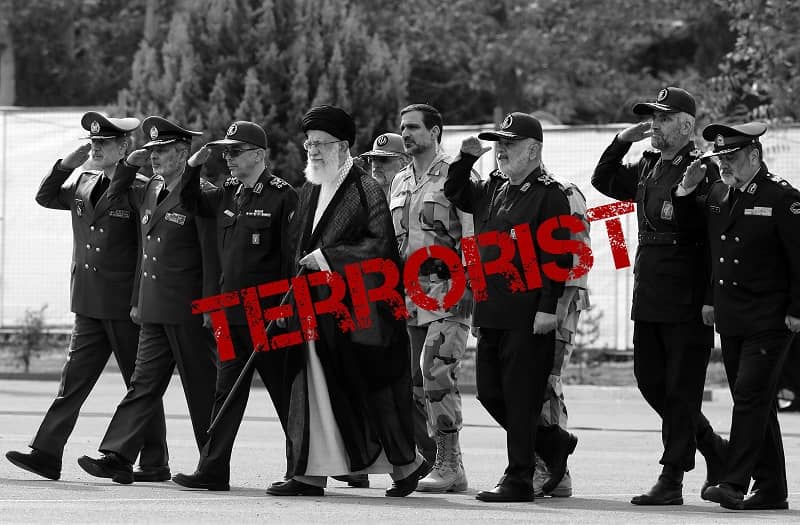 Amid the rising discussion about re-imposing sanctions on the Iranian regime, it is necessary to understand why it is important for the United Nations to reimpose all sanctions on the mullahs’ regime.

On Tuesday, the parties to the 2015 Iran nuclear deal held their joint commission in Vienna amid the rising issue of re-imposing sanctions on the Iranian regime. Iranians in Austria held a protest outside of the building and called for re-imposing all sanctions on the regime. In addition, in a statement, over 100 lawmakers from European and Arab countries urged the UN to reimpose all six Security Council resolutions on the regime. But why is it important.

Since the Iranian regime came to power in 1979, due to their reactionary and backward ideology, the mullahs were quickly rejected by the Iranian society. To prolong its life, the regime used domestic oppression and export of terrorism abroad as its pillars of existence. The regime’s warmongering policies such as prolonging the Iran-Iraq war for eight years, constant funding of terrorist groups in the region, and producing weapons of mass destruction are part of its strategy of exporting domestic crises outside.

The Iranian regime established the Revolutionary Guards (IRGC) and its auxiliary branch, the Quds Force, to pursue its warmongering policies and achieving its dream of an “Islamic Caliphate.” Specific organizations and networks in the region have been set up by the regime to buy, sell and smuggle weapons and military equipment, and to export weapons to other regional countries on a wide scale in the context of Tehran’s transgressions.

Export of terrorism and domestic oppression are two factors that officials from both the regime’s factions agree on, despite their infighting. The mass murder of protesters in November 2019, and producing missiles, during the tenure of the regime’s so-called “moderate” president, Hassan Rouhani, are two indicators of this fact.

Hassan Rouhani in this regard had said: “In the era of sanctions, we hear that a missile moved from our territory and struck a terrorist target. It is true that those who fired the missile were the ones who worked hard and made sacrifices. But who made the missile? The manufacturer of that missile was the (Iranian) government and the Ministry of Defense. … The strategic weapons produced during the 11th government (Rouhani administration) alone are equivalent to 80 percent of the entire arsenal produced by previous administrations.”

The regime pursues its warmongering polices through various ways. They include:

Following the Iran-Iraq War, in 1988, the clerical regime based a portion of its military doctrine on manufacturing an array of missiles. In addition to ballistic missiles with the capability of carrying nuclear warheads, it has focused on a range of missiles to facilitate its terrorism and warmongering in the region, including cruise and guided missiles. To implement its objectives, the regime has set up the Aerospace Industries Organization in the Defense Department and has dedicated a complex of factories to building various parts of its missiles. The IRGC has focused on producing cruise missiles, missile gyroscopes, roadside bombs, and production of unmanned aerial vehicles and drones.

The regime’s deadly influence in the Middle East

The Iranian regime continues sending weapons to terrorist groups in the region. In this regard, Hassan Nasrallah, head of the Lebanese Hezbollah terrorist group, previously said: “Brothers, we are not ashamed to say that Hezbollah’s budget, expenses, food, and weapons are from the Islamic Republic of Iran. As long as Iran has money, it means we have money. Do you want more transparency?”

In an interview with the state-run Etemad Online news agency published on May 20, Heshmatollah Falahatpisheh, a Member of Parliament from Kermanshah and member of the Majlis (Parliament) National Security Commission, acknowledged how the mullahs’ regime been wasting national wealth to fund Syrian dictator Bashar-al Assad. “When I went to Syria, some complained that I had caused expenses, but I will say this again: We may have given $20-30 billion to Syria. The money of our people was spent there,” Felahatpisheh said.

The Iranian regime’s terrorism is not limited to the Middle East. The regime’s terrorists and assassins have been targeting dissidents, particularly members and supporters of the People’s Mojahedin Organization of Iran (PMOI/MEK) and the National Council of Resistance of Iran (NCRI).

The recent designation of 13 individuals by the U.S. State Department for their role in assassinating Dr. Kazem Rajavi, a leading human rights figure and the NCRI representative in Switzerland, along with the recent trial of the regime’s diplomat terrorist, Assadollah Assadi, for his role in the foiled bombing plot against the NCRI’s annual “Free Iran” gathering in June 2018 in Paris, indicate that the mullahs’ terrorism and oppression are not limited to Iran or the countries in the region. In fact, all the regime’s embassies in Europe, as revealed by the Iranian Resistance, coordinate terrorist activities and supply the operatives.

The impact on people

The regime continues its warmongering policies and terrorism while the people of Iran are grappling with poverty and now the coronavirus crisis with its rising death toll. The regime’s ongoing production of weapons of mass destruction and funding terrorist proxy groups debunks the regime and its apologists’ efforts in blaming sanctions as the real cause of the Iranian people’s poverty and misery. The Iranian people chanted during their protests: “Let go of Syria, think of us instead,” and “No to Gaza, no to Lebanon, my life only for Iran.”

Now lifting the arms embargo on the regime would further empower the IRGC in its quest to export terrorism. In addition, as the IRGC and the Amy of the clerical dictatorship lack advanced weaponry and military gear, lifting the international arms embargo would allow them to resupply their arsenal with modern weaponry in order to advance their aggressive objectives and warmongering.

Mrs. Maryam Rajavi, the NCRI President-elect, has repeatedly said: “This regime must not be allowed to acquire even a single bullet. It must not pocket profits from a single barrel of Iranian oil. And it must not spend even a single dollar from revenues that belong to the Iranian people for its own survival.”

All the six UN Security Council resolutions sanctioning Iran’s regime should be reimposed. Under no circumstances should this regime have unrestricted access to purchase or sell weapons. Finally, to end the Iranian regime’s threats, which continues to cause murder and destruction on a regional and global scale, the international community must recognize and acknowledge the right of the Iranian people to revolt against religious tyranny. The regime’s leaders must be put on trial in international tribunals for their killing of 120,000 dissidents, including the massacre of 30,000 political prisoners in 1988, and the murder of 1,500 protesters in November 2019.