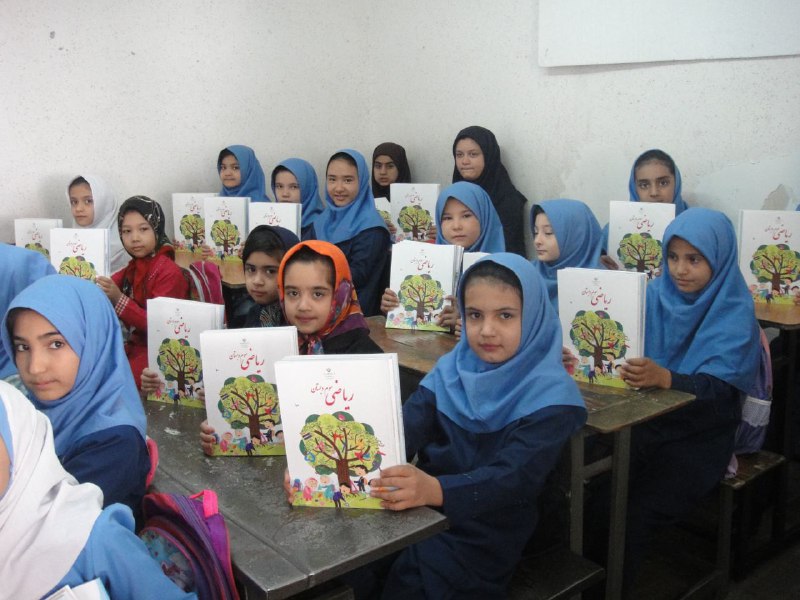 Written by Mansoureh Galestan on 23 September 2019.

Students face numerous obstacles in having access to quality education in Iran; such obstacles double and triple when it gets to girls and young women, according to the Women's Committee of the National Council of Resistance of Iran (NCRI).

The new academic year starts in Iran on September 23 for some 15 million elementary and high school students and another four million students of higher education. With the Iranian regime’s failure to provide free and mandatory education for Iranian children while more than 80% of the nation is living under the poverty line, there is no guarantee for Iranian children and youths to be able to continue their education.

Article 30 of the Iranian regime’s constitution obliges the government to provide free and mandatory education for all to finish high school, but levying heavy tuitions has deprived thousands of students of having access to education in Iran.

According to the former deputy director of the Budget and Planning Organization, “More than 9% of Iranian families have to sell their belongings to provide for their children’s education since they do not afford to pay from their regular income.” (The state-run Ettela’at daily newspaper – June 17, 2019)

The head of the Association of Skills Training Schools announced that 37 percent of Iranian students drop out of school before getting their diploma and that only 7 percent of high school graduates are admitted to universities. (The state-run Fars news agency – November 4, 2017)

Some sources believe that “Only one out of every 12 children deprived of education in Iran, is identified.” (The state-run Alefba website, May 23, 2019)

The figures published by the Iranian state media show a downward trend in the number of college students, falling from 4,811,581 students in 2014-2015 academic year to 3,616,114 in 2017-2018.  (See chart) That is an average of 398,000 fewer students per year despite new admissions. This cannot be explained but by pervasive poverty in Iranian society, lack of free education, and the absence of any government support for college students. (The official IRNA news agency- December 30, 2018; the state-run Mehr news agency – October 23, 2017; the state-run Bazaarnews.ir – December 21, 2016) 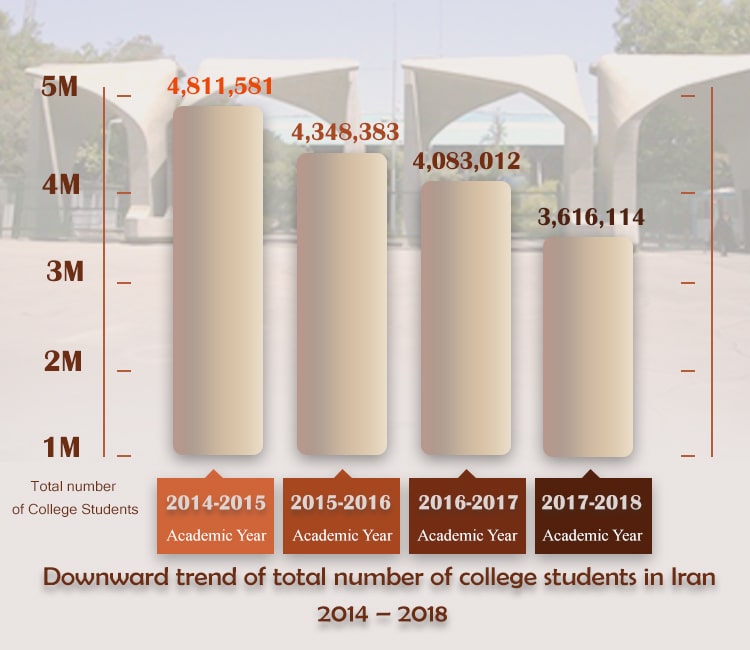 An info graph published by the state-run media shows that in the academic year 2017-2018, the number of students at the elementary level is 7,877,943; while only 3,192,493 students study in junior high school and 2,201,126 students study in senior high school level. This graph shows that millions of students cannot continue their education in Iran after finishing elementary school, as well as the junior high. (The state-run PANA news agency – August 23, 2018) 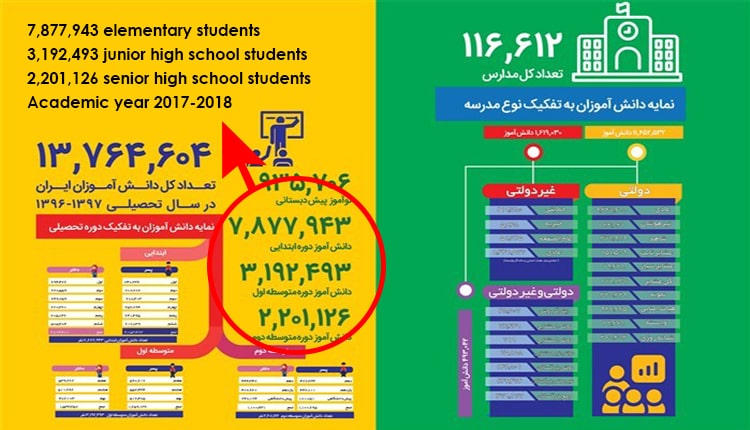 Substandard and unsafe schools and universities

Iranian students have to study at substandard and unsafe schools and universities. Under the mullah’s rule, the Education Ministry’s budget has no priority and does not suffice even to pay the wages and salaries of teachers. (The state-run Salamatnews.com – September 26, 2018)

The Chair of the City Council of Tehran, Ray, and Tajrish, Mohsen Hashemi, disclosed that “700 schools in Tehran will be destroyed in case of a severe storm, let alone an earthquake.” (The state-run Khabaronline.com – December 14, 2017)

A seven-year-old girl in Sanandaj, Donya Veisi, lost her life in October 2018 when the school wall crumbled on her. (The state-run Tasnim news agency – October 8, 2018)

The Minister of Education, Mohammad Ali Bat’haii, who had previously announced that 42% of schools in Iran lack safe heating systems, revealed that it would take 7 to 8 years to replace the non-standard heaters. (The state-run Rouydad24.com – December 19, 2018)

This while school fires jeopardize the lives of many students every year.

Last year, a fire caused by a non-standard oil heater at a classroom in Osveh Hassaneh School in Zahedan took the lives of three girl students and one was severely injured. (The state-run Mashregh website – December 19, 2018)

Earlier, the little girls studying in an elementary school in Shin-Abad (Piranshar, West Azerbaijan Province) and another group of girl students in Doroodzan (Fars Province) suffered heavy injuries in school fires which have remained unhealed after years.

In another girls’ school in Bam, Kerman, 25 students were poisoned by carbon monoxide leaked from the heater. (The state-run ISNA news agency – January 29, 2019)

In addition to the run-down state of the educational spaces, the students’ transport vehicles are also old and worn out, victimizing dozens of students every year.

On December 25, 2018, an old bus turned over on the campus of the Sciences and Research Branch of Tehran’s Azad University leading to the deaths of eight students, the driver and the father of one of the students who was onboard. Twenty-eight students were injured. As students put it, “The bus had an accident the day before, hitting the pavement due to non-functioning brake.” (The state-run BORNA news agency- December 25, 2018)

The abovementioned accidents are a few out of dozens of accidents in schools every year which take their toll on the lives and health of students.

75 percent of students deprived of education in Iran are girls

Addressing a Planning Council meeting of Kohgiloyeh and Boyerahmad Province, Massoumeh Ebtekar, director of the presidential directorate on Women and Family Affairs, said, “The number of girls deprived of education in Iran is three-time greater than boys. What we mean by deprived of education is any girl or boy between 6 and 18 years of age who is not present in the national education cycle.” (The state-run ANA news agency – September 17, 2019)

The director of Hamidieh’s Department of Education in Khuzestan Province told the press, “Long distances between villages and lack of junior and senior high schools (in rural areas) have contributed to girls quitting school in this region.” (The state-run ILNA news agency – September 14, 2019)

“The provinces of Sistan and Baluchistan, Khuzestan, West Azerbaijan, Kerman, and of course Tehran and Razavi Khorasan have the largest number of school-age children deprived of access to education.” This was announced by Maryam Sedaghat, member of the scientific board of the Research Institute for Development Studies in the organization of University Crusade. She reiterated, “The main factors contributing to the number students deprived of education in Iran are poverty and inequality.” (The state-run IRNA plus website – October 13, 2018)

Every year, at least a quarter of elementary and high school students in Iran are forced to quit school with a large number of them joining the army of child laborers, said Nahid Tajeddin, a member of the Social Commission of the mullahs’ parliament. (The state-run Salamatnews.com – September 27, 2017).

The number of child laborers in Iran is estimated to be between 3 to 7 million. (The state-run Tasnim news agency – September 27, 2017)

In an interview with the state-run ISNA news agency, Tahereh Pajuhesh, vice president of the Association Supporting the Rights of Children in Iran, stated that the number of child laborers in Iran is on the rise, despite their numbers decreasing worldwide.”  (The state-run Anatoly news agency – July 14, 2017)

Most teachers live under the poverty line

In light of the economic situation and liquidity in Iran, the minimum monthly expenses for a family of four in April 2019 was 8 million tomans ($700).

Education Minister, Mohammad Bat’haii, has been cited as saying, “Teachers have always had to have a second job to earn their living. Without any exaggerations, if a teacher wants to earn his/her living just by teaching, they cannot have an average life.” (State-run Tasnim news agency- March 3, 2019)

Vahid Mahmoudi, economist and a university professor, pointed out, “69% of the teachers drive taxis as their second job and 54% of the teachers have low income and little time.” (State-run Tasnim news agency – March 3, 2019)

So, teachers who live under the poverty line and are always preoccupied with the thought of feeding their families can never focus on the quality of education they offer to students and cannot put enough time into it.