“The International Volleyball Federation (FIVB) should cease awarding Iran the right to host FIVB international tournaments until the country ensures that female spectators can freely attend volleyball matches in the country,” Human Rights Watch said in a letter to Ary Graça, the sports federation’s leader.

In a matter of weeks, the FIVB will announce host countries for its 2017 World League.

“The FIVB should not grant Iran the right to host the next World League tournament unless Iran demonstrates it has put an end to restrictions on women’s ability to purchase tickets to and attend all matches,” the HRW letter added.

In the letter to Graça, Human Rights Watch attached “a screenshot of the FIVB’s Persian website which stated women could not purchase tickets for the July 2016 games in Tehran due to ‘limited space for female spectators’ “.

“A screenshot taken at the precise moment tickets went on sale for the Iran-Serbia match reads, ‘Women quota are finished,’ raising serious concerns that the ticket sale may have never opened to women. The effect was that, once again, only men could buy tickets to FIVB matches in the 12,000-seat Azadi Stadium,” the letter said. 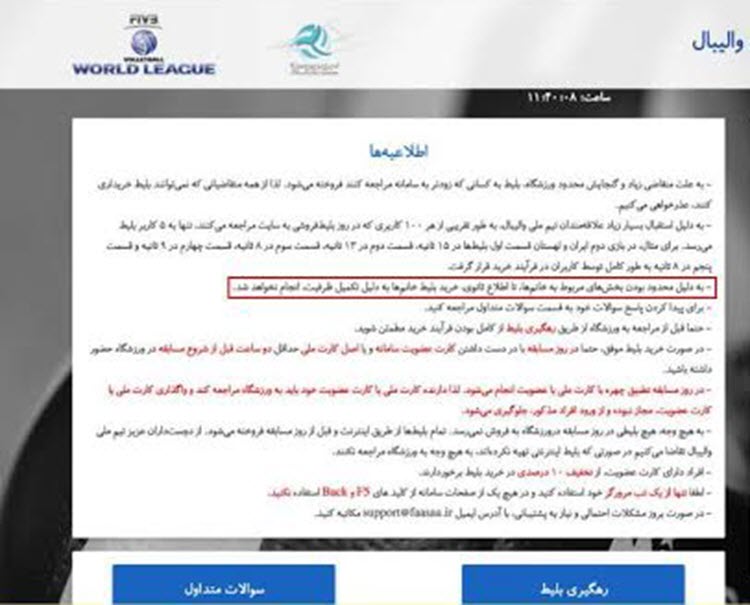 The Persian language news site Tabnak reported that these tickets were not put on sale to the general public, but were reserved for wives of the officials of the Iranian regime or female officials, Iranian female athletes, and in some cases, the wives of foreign diplomats.

Minky Worden, director of global initiatives at Human Rights Watch wrote: “Awarding Iran yet another World League tournament would only embolden the authorities in their discriminatory policies that sideline women.”

“Despite its pledge to end discrimination in the stadiums, the Iranian volleyball federation appears to have constructed a system that denies most women any opportunity to attend matches,” Worden said. “The FIVB should make clear that Iran will not be able to host international volleyball competitions until the Iranian federation makes good on its promises.”