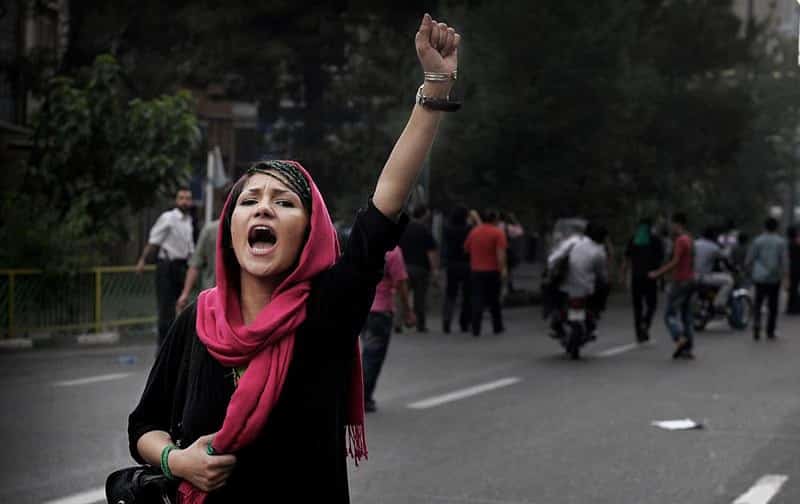 March 8 marks International Women’s Day. Since the 19th century, women across the world are struggling for equality in all aspects, and there has progressed in this field. But in Iran under the mullahs’ regime, women are under double pressure.

Since taking power in 1979, the misogynous clerical regime started its oppressive measures against the women, by forcing them to wear the “hijab.” The regime’s affiliated thugs splashed acid on the faces of women who protested the mandatory veil.

The regime has never abandoned its misogynistic rules and in fact, has increased them.

On February 17, 2021, the Iranian regime hanged the lifeless body of Zahra Esmaili. She had died of a heart attack upon seeing the execution of 16 men. Nevertheless, the regime hanged her lifeless body. Ms. Esmaili, a mother of two, was sentenced to death for the alleged murder of her husband, Alireza Zamani, one of the director generals of the notorious Intelligence Ministry, who had tried to sexually assault her teenage daughter.

Zahara Esmaili’s execution marked the 114th execution of a woman since the regime’s so-called “moderate” President Hassan Rouhani assumed office. Iran under the mullahs’ regime holds the record for the highest number of women’s execution per capita.

Execution of a woman – 42 with two children – in Gohardasht Prison of Karaj, marks execution of 114th woman during Rouhani’s tenure as mullahs’ president.

Zahra Esma’ili was hanged this morning along w/ 6male inmates in Gohardasht Prison.
Zahra was a victim of domestic violence. pic.twitter.com/nTNWFCz58b

In addition to execution, women are subjected to vicious tortures and lengthy prison sentences. Many of the female detainees of the November 2019 uprising were sexually harassed by the regime’s forces inside the dungeons. The regime has been using rape and other forms of sexual harassment to break women’s spirits since the 1980s.

The Iranian regime also targets women on the streets and arrests or fines them for not being “properly veiled.”

According to a study by Women’s Committee of the National Council of Resistance of Iran (NCRI), in July 2020, the Iranian regime had 27 state-agencies and ministries tasked with oppressing women. This was first revealed in December 2015 by Hossein Ashtari, the commander-in-chief of the State Security Force, that “26 government agencies are responsible for the issue of Hijab and Chastity.”

According to the NCRI’s study, “In September 2019, the supreme cultural council approved a document entitled ‘Supplementary Collection.’ Under the new plan, 27 state agencies are responsible for enforcing the mandatory Hijab, which includes 10 ministries. All the above said agencies and the bodies not mentioned involved in the suppression of women work in accordance with the policies of the Supreme Council for Cultural Revolution, which is chaired by the mullahs’ President, Hassan Rouhani.”

Some of these agencies include:

Among all agencies, the State Security Force plays a key role in harassing Iranian women. “The State Security Force (SSF) acts as the regime’s iron fist and exerts daily pressure on women. In May 2015, the State Security Force was reinforced by 7,000 plainclothes agents in Tehran alone. In November 2015, Saeed Montazer Al-Mahdi, the social deputy for the State Security Force, announced that the number of guidance patrols had increased 40 folds. In 2016, Iranian women received 64,000 warnings related to the observance of the official dress code. During the same period, more than 1,262 women were summoned to the moral security section of the police. At least 215 vehicles were confiscated and 500 individuals suspected of removing the veil were dealt with.6 In June 2016, only in Chaharmahal and Bakhtiari province, 362 businesses were warned and 126 shops were closed for failing to observe the hijab of their mannequins in the showcases,” read the NCRI Women Committee’s report.

The full report could be found here.

In Iran, the regime has legalized misogynous rules in the constitution

The mullahs wrote, approved, and implemented their constitution in 1979. The introduction to the Constitution reads in part: “Women regain their crucial and invaluable duty of motherhood in raising vanguard, ideological human beings, while they, themselves, are comrades of men in active fields of ‘life.’

Thus, women were defined as mothers whose duty is to give birth to human beings who adhere to the ruling regime’s ideology, not as human beings with specific social, civil, and political rights. According to the mullahs’ constitution, women are considered alongside men, not equal to them in social activities, but at the service of “life” In this way. The Constitution also implies that the family, as the founding unit of society, must adhere to the ruling clerical regime.

According to Article 942 of the Iranian Civil Code, men can have multiple wives, both permanent and temporary. Addressing the issue of inheritance after a man’s death, the article says, “In case of multiple wives, a quarter or one-eighth of the heritage which goes to the wife will be divided equally among them.”

The NCRI’s Women’s Committee issued a report on this matter in May 2020.

These honor killings and shocking tragedies are due to he misogynistic laws of mullahs’ regime. Laws that do not criminalize #VAW, including domestic violence, serve to perpetuate it.

Institutionalized Misogyny in the laws of mullahs’ regime ruling #Iran:https://t.co/kd9SfWpepx

Iranian women also suffer from inequality in work. According to official figures, nearly 870,000 women had lost their jobs by summer 2020, joining the army of the hungry. Today, 40 million people in Iran, including 28 million women, are economically inactive. That is, they have been robbed of their right to social and economic participation. The number of women heads of households, which was 3 million in 2016, is now between 4 to 5 million, and 80 percent of them are unemployed.

Despite the regime’s heavy crackdown on women and its hysterical hostility towards them, Iranian women have never abandoned their struggle and are the avantgardes of the Iranian people’s struggle for freedom and democracy.

During the November 2019 Iran protests which rattled the regime’s foundation, footages from Iran showed women on the frontline of protests guiding the crowd. There are hundreds of women among the 1500 martyrs of the November 2019 uprising.

The regime’s Minister of Interior, Abdolreza Rahmani-Fazli, following the November 2019 uprising, said: “In Tehran, each team of four, five or six people were being led by a woman.”

The Iranian Resistance movement and in particular the People’s Mojahedin Organization of Iran (PMOI/MEK) are being led by women.

In her message on the occasion of International Women’s Day, NCRI president-elect Mrs. Maryam Rajavi said: “When we say Iranian women are the standard-bearers of hope for the future and hope for freedom and equality, we are considering not only their brilliant history of struggle but also their present capacity and potential. One can see this potential in the all-women Central Council of the PMOI which is leading a nationwide resistance against the mullahs’ ogre of suppression and misogyny. From December 2017 to January 2020, our sisters and daughters demonstrated their heroism. Women and youths were the pivotal force in the uprisings of December 2017-January 2018.”

Mrs. Rajavi has emphasized, that in tomorrow’s Iran: “all women’s individual rights will be recognized, including the freedom of belief, religion, employment, and travel. Women are free to choose their attire. In tomorrow’s Iran, men and women will achieve total parity in social, political, cultural, and economic rights. Women must enjoy complete freedom in choosing their husbands and in marriage. Any form of compulsion against women in the family will be banned. Women’s equal right to divorce will be recognized. Polygamy will be banned. Physical, sexual, or psychological violence against women in the workplace, educational centers, households, or anywhere else will be considered a crime. Any sexual exploitation of women under any pretext will be prohibited. The mullahs’ Sharia laws will have no place in tomorrow’s Iran. All international covenants on the rights and freedoms of women, particularly the Convention to Eliminate all Forms of Discrimination against Women, will be at the front and center of civil laws.”