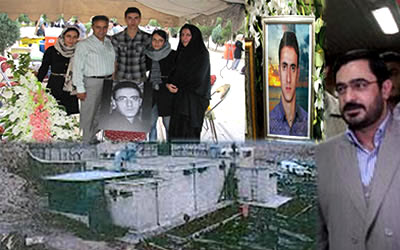 NCRI – The apology of one of the regime’s criminal officials aroused much outrage among families of the victims.

Asefeh Kamrani, the bereaved sister of one of the victims of the 2009 killings, reacted strongly to the apology of the Butcher of Kahrizak, Saeid Mortazavi.

She said, “Your apology cannot soothe the burning pain and sobbing of my parents.”

Ms. Kamrani’s brother, Mohammad, was killed under torture in Kahrizak Prison in 2009.

In the wake of the mounting movement to bring justice to the perpetrators of crimes against humanity in Iran, Saeid Mortazavi apologized on September 11, 2016, for the crimes taken place in 2009 in Kahrizak detention center but claimed that they were not deliberate!

Asefeh Kamrani replied to this, “If nothing was deliberate, why they were sexually assaulted? How could it be possible that the tortures were not premeditated? The catastrophes are not something that we can ever forgive.”

“The nightmare of Kahrizak is endless, and its stain can never be cleaned, even with your apology after seven years, Mr. Mortazavi,” Ms. Kamrani declared.

Saeid Mortazavi was Tehran’s Prosecutor in 2009. He ordered transfer of those arrested in the anti-government demonstrations to Kahrizak Prison where they were detained under inhuman conditions, sexually assaulted, and killed under torture.

Previous articleIran- UN High commissioner for human rights: “my Office has been given no access since 2013.”
Next articleHariri: Iranian regime is spreading terrorism in Islamic world