Iran- UN High commissioner for human rights: “my Office has been given no access since 2013.” 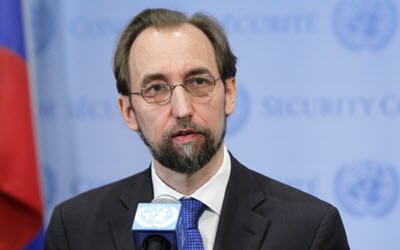 NCRI – Zeid Ra’ad Al Hussein the United Nations High Commissioner for Human Rights, in his opening statement at 33rd Session of Human Rights Council,  which was held in Geneva on 13 September 2016, by referring to Iranian regime’s behaviour of disregard and disrespect for international law stated:

“Regarding the Islamic Republic of Iran, my Office has been given no access since 2013 – despite several years of good technical cooperation prior to that date. Our offers to begin a technical dialogue on the death penalty have been systematically overlooked, as have all other proposals of engagement. This is particularly regrettable given the reports we continue to receive of fundamental problems with the administration of criminal justice; continued execution of large numbers of people, including juveniles; allegations of discrimination and prosecution of religious and ethnic minorities; harsh restrictions on human rights defenders, lawyers and journalists; and discrimination against women both in law and practice.”

Previous articleCreating a black market in Mashhad Prison by the prison officials
Next articleIran: Bereaved sister does not forgive criminal prosecutor