Iran: I’d Rather Die Than Give in to Oppression, Writes Female Political Prisoner 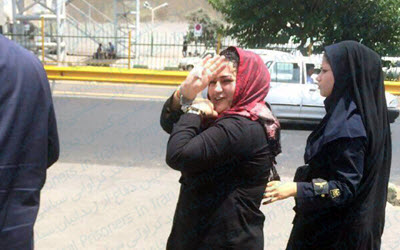 NCRI – The imprisoned human rights defender ‘Atena Daemi’ has gone on a hunger strike in Evin Prison, to protest against conviction of her two sisters Hanieh and Ensieh.

“Every once in a while,” writes Atena in her letter, “we hear from around the world how criminals or terrorists take people hostage to reach their goals, namely retaliation or wealth. But in Iran, contrary to everywhere else in the world, these are the law enforcement officials who take people, their properties, and families of political prisoners hostage to create a climate of fear and repression in society, thus to achieve their objective, which is nothing but staying in power.”

“To implement my prison sentence issued in October 2016,” she adds, “they raided our house while covering themselves with masks and hats, without showing any arrest warrant of identity cards. While insulting and threatening, they beat me and shot an unauthorized, secret video.”

“They also complained against me and my sisters, so that a new case was opened”, she continues, “I, along with my sisters Hanieh and Ensieh, were convicted of ‘insulting the officers on duty’, the same charge for which a stay of proceedings was issued before. I received a three months and one day prison sentence, to be added to my previous five-year’ jail term, and each of my sisters also got a three-month suspended prison sentence.”

“Over the months following my arrest, I did necessary follow-ups and also complained against ‘Sepah Sarallah’ officials, but a stay of proceedings was issued for them!”, Daemi writes in another part of her letter, “I complained against the verdict, but my complaint went nowhere as my complaint letter was disappeared with the intervention of the warden. Since the law is a one-sided street, and given that I’ve never surrendered to oppression and will never do that, I decided to protest against this clear act of hostage taking. So, I announced that I’d sit in at the office of the women’s ward guard officer for a few days, so as to give them adequate time to address my demands and fix the violations and the illegal verdict in my case, and that I’d go on a hunger strike if my demands remain unaddressed by the end of the deadline.

I spent four days and three nights at the office, starting from Tuesday April 4, 2017. I even slept there overnight! What they did about my demands, however, was to indict me and open a new case for me for my sit-in at the office. They then threatened my wardmates, who came to visit me at the office, with new, strict, and punitive measures so as to prevent other prisoners from backing me. And lastly, they sent warden’s secretary to the ward to, in addition to insulting and threatening, make a speech about his political positions and brag about the capabilities of the Revolutionary Guards. And all these incidents were arranged by the warden.

They’d been told that I’d go on a hunger strike from April 9 unless my demands were met, which were meeting with my sisters, their full acquittal, and return of the bail.

I’m not going to stop my hunger strike until my demands are met, with the warden, Revolutionary Guards agents and prosecutor being responsible if anything is going to happen. I’ll defend to the last bit of me from the legitimate rights of my sisters, and will not allow the security bodies to violate the law that they themselves have legislated, using our families as a means of psychological torture to create a climate of repression in society.

I’d rather die than give in to oppression