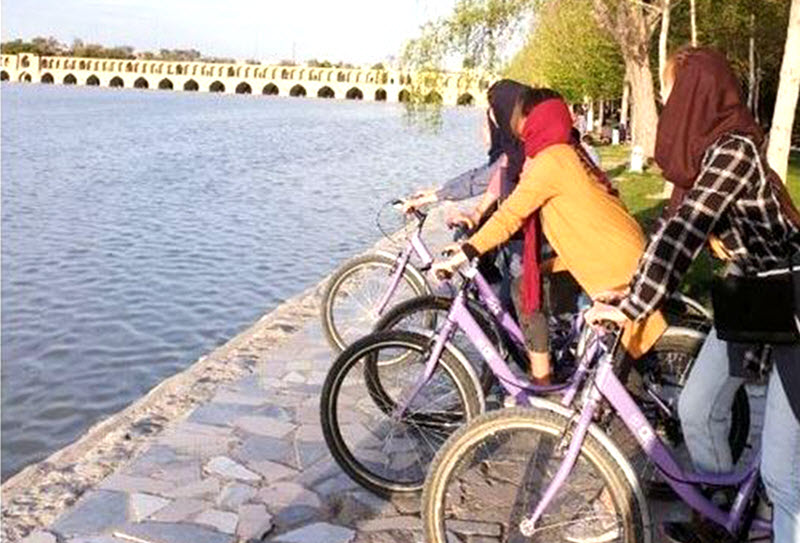 The regime’s prosecutor in Isfahan has banned women’s cycling in public by pronouncing it “a prohibited act” which will entail punishment based on the “Islamic Penal Code.”

The Iranian regime’s official news agency IRNA quoted Prosecutor Ali Esfahani as saying: “As per the attestation of Muslim scholars, and based on the law, cycling by women in public is haram (prohibited).”

The prosecutor said the police have been ordered to warn women against cycling in Isfahan, and if they insist on riding, police may confiscate the cyclists’ ID, and in some cases their bicycles, adding that “repetition of a ‘haram’ act, will make the offender subject to Islamic punishment.”

He said the Municipality of Isfahan has been advised to design a special “covered bicycle for women,” but he did not elaborate on how that would look like.

Hundreds of students of Tehran University held a major protest on May 13 against renewed efforts to enforce strict compulsory veiling rules on female students.

Students gathered on campus and chanted: “Students would rather die than to succumb (to oppression).” Students carried placards which read: “Freedom of choice is our inalienable right.”

Last week, Tehran University students witnessed female para-military Bassij members stationed on their campus along with other security forces. The measure sought to harass female students over their clothes and head coverings and enforce the compulsory veil through cracking down on female students. Security forces were stationed all across the campus to enforce disciplinary rules and to terrorize the students, especially the female students.

In her ten-point plan on women’s rights in a future free Iran, Iranian opposition leader Maryam Rajavi has announced: “Women are free to choose their own clothing. The law of forced veiling shall be repealed. Laws that prescribe administrative punishment for lack of veiling of female workers or employees shall be repealed. Written or unwritten laws on controlling the clothing or behavior of women under the rubric of ‘mal-veiling,’ which have violated Iranian women’s right to freedom and security, shall have no place in tomorrow’s Iran.”